When a scientist makes a new scientific discovery it generally attracts some attention.  The amount of attention it attracts depends on the perceived importance of the discovery.

Let's say that the discovery could affect numerous aspects of society - ranging from where people live, how and where they grow food, the spread of disease, the balance of all life on earth and a major extinction event.  That would attract considerable attention.  Add that it would affect the weather - arguably the item most discussed by humans on a daily basis with the possible exception of human health.  ("What's the weather today?" "Do I need to bring a brolly?" "Sorry I'm late, there was heavy traffic because of the rain." "Can't wait for the snow to go skiing again." vs "Hi, how are you?")


A Brief History of Climate Research


It was first mooted by Fourier in the 1820s that the air, or more precisely some components in the air, kept earth at a liveable temperature.  This spawned other work by Tyndall in the mid 1800s, which identified which components were responsible and the mechanism by which it operated.  This in turn led to more work by Arrhenius to quantify how a change in the amount of these components would affect the temperature of earth.  All of this work was done more than 100 years ago.

A few decades later, in the 1930s, an engineer named Callendar did more calculations to determine the amount of actual change that was taking place in the composition of the air as a result of human activity, and what that means for surface temperatures.  The second world war intervened.  After the war Gilbert Plass  and others picked up the study.  In the 1950s, Charles David Keeling began to measure atmospheric CO2.

Finally, in the 1960s the President of the United States was formally alerted of the issue by Roger Reveille.

In the UK, the Climatic Research Unit commenced the massive task of collating and documenting temperature records across the entire world, going right back to when such measures were first recorded more than a hundred years earlier.  Elsewhere in the world scientific institutions expanded their research.

By the 1980s it was obvious to people in the scientific community and to many outside it that burning fossil fuels was causing or going to cause a change to climates all over the world.  Not only that, it was going to cause changes to the oceans, to glaciers, to waterways, to sea levels, to the spread of pests and diseases, to all life forms and ultimately would affect where and how people could live.  Governments were rightly concerned about this and acted together and created a mechanism by which they could be informed.  The IPCC was finally established in 1988.

Today there is little if any research aimed at corroborating the finding.  It's well accepted and understood.  There is ongoing research scoping the problems the discovery has uncovered.  Answering questions such as: how quickly will seas rise; how long before a region will run out of water; what areas will dry and what will be inundated; how many life forms will survive the resulting mass extinction, which ones and how will that affect humanity.  And a lot more research into how to combat the problems, such as: developing new crop varieties resistant to drought or excess moisture; how best to combat catastrophic bushfires of unprecedented ferocity; whether to relocate cities or build barriers to protect them.

Spencer Weart has written a history of climate research that can be accessed here.


My Snark of Today


This leads me to the question - which I know is not very polite and frowned upon, but it is pertinent: Are people who deny even the position of the science "Not Very Bright" or is it that they assume their audience is "Not Very Bright" or are they just shouting for the sake of it?

Anthony Watts sometimes comes across as being, to put it politely, thick as a brick.  Today on WUWT he shows a chart from a paper on scientific consensus, saying:


Roman Murieka has a great statistical analysis of the Cook ‘consensus’ paper over at Climate Audit. There’s a surprise result: The number of papers endorsing AGW is falling, while the number of papers with no position is increasing. Looks like an increase in uncertainty to me.


"Looks like an increase in uncertainty?"  Only if you are thick as a brick.  Anthony posts a chart based on this one from the Cook13 paper itself.  Roman's "analysis" as far as this chart went, consisted of adding linear trend lines. 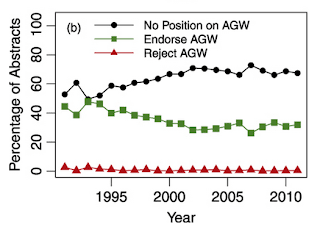 Has Anthony even read the paper he's writing about? No?

Since Anthony wrote this as a "surprise result", it looks as if, despite his various articles on the study, Anthony hasn't even read the paper!  Not only that, but if the number of papers explicitly stating "humans are causing global warming" is declining - that is not a surprise, it's because that fact is so well accepted it doesn't bear repeating.  In the early 1990s as many as 50% of abstracts were still explicitly stating that humans are causing global warming.  These days it's fewer than 40%.

The other thing that this article of Anthony's suggest is that he is not at all familiar with climate science.  For him to be unaware of the overwhelming consensus on the cause of the recent warming is barely credible.  For someone who's been blogging on the subject for four years or more his ignorance is appalling.  Surely he doesn't expect anyone to take him seriously.

Is Anthony Watts "Thick as a Brick" or a "Disinformation Propagandist"?


For this reason among others I maintain we are entitled to wonder aloud if Anthony Watts is "thick as a brick" or a deliberate "disinformation propagandist" or both.

Why is it that on this arguably most critical problem ever faced by humankind, that there are still a number of people intent on spreading lies and delaying solutions.  What do they hope to gain?

Unless it's because they decided to not try for a place in history for the "good" figuring it's easier and takes far less effort to play the role of the villain, so they might at least be remembered for the "bad".

Yeah, right - as a comic book "bad guy" but more likely not even a footnote.

Looking at the comments, it's reasonable to assume that Anthony has narrowed his target audience away from the general population to focus in on the Dismissives, including two people who endorse a paedophile analogy; several who want to argue the details of the 97% consensus and shift the focus to the less than 3%; and others who are distinctly paranoid arguing for a conspiracy on a gargantuan scale, hugely grander than any paranoid conspiracy theory before.  That the majority of humans are conspiring to hide the real facts from the 'skeptics' (and that 'skeptics' are not clever or able enough to figure out the 'real' situation).
Posted by Sou at 2:29 PM