Abbott Destroys the Joint:- Sexism regains its crown in Australia as Tony Abbott retreats to the 1950s!


It took just over a week for Australia to go back to the 1950s.

Tony Abbott, arch conservative and, to use an outdated expression, a renowned male chauvinist pig, has announced his new leadership team.  Not only does it not include a science portfolio, he has only appointed one woman to senior ranks! One!  That's right - only one out of nineteen Cabinet appointments is a woman.

As if to rub salt in the wound, Tony Abbott is quoted as saying:


Plainly, I am disappointed that there are not at least two women in the cabinet

He is disappointed there are not least TWO women?  TWO - out of NINETEEN!

Only four months ago, Australia was proud to have a woman as Prime Minister. There were only four women (out of 20 members) in Cabinet, but there were in total, ten women out of 30 Ministers plus four out of 12 Parliamentary Secretaries (Members of Parliament).

Today we have one.  ONE! woman in Cabinet plus six overall - out of 42 appointments.  That's an overall drop from 33% of women with portfolio responsibilities down to 14%.

I am lost for words, so here's a picture illustrating Australia's new lot of Federal Cabinet Ministers: 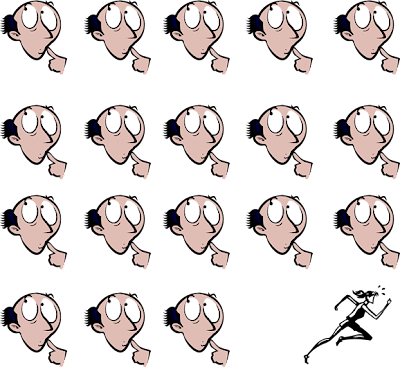