The dark side of humanity at WUWT: Tim Ball's hopes have been realised, his lies have not

Anthony Watts has posted another article from his resident conspiracy theorist Tim Ball (archived here, latest here). I won't bore you with all the details. You know that Tim's articles are usually ugly paranoid conspiracy theories written to feed the salacious appetites of Anthony's deluded fans. There are just a couple of points I'll make.

The first one is that Tim's hopes are realised. He says: "I Hope The IPCC Is Correct About Warming Because Cooling Is a Bigger Problem". Here you go, Tim:


The other thing I'll draw your attention to is that Tim isn't just a wacky conspiracy theorist, he's a big liar, too. See for yourself, from the very first chapter of the Summary for Policymakers in the latest IPCC WG1 AR5 report provides uncertainty limits:

Yet what does Tim do? He tells a bald lie, and writes that uncertainties are omitted:


What is systematically omitted from the SPM are precisely the uncertainties and positive counter evidence that might negate the human interference theory. Instead of assessing these objections, the Summary confidently asserts just those findings that support its case. In short, this is advocacy, not assessment.


Tim doesn't say what he means by "positive counter evidence". The IPCC reports discuss all the latest science, including where the science is uncertain or there are mixed findings.


Deception is all that Anthony Watts has to offer


You cannot believe anything you read at WUWT, without checking. It isn't worth the effort of checking what you read, although it's easier to count the small number of accuracies than it is to count the lies. The accuracies are few and far between. The lies are everywhere.

Liar deniers and paranoid conspiracy theorists are all that Anthony Watts has left. He had an article from Albert Parker/Boretti telling more of his lies about sea level today, too - archived here. That time some of the sharper-eyed WUWT-ers picked him up on some of the flaws. Anthony himself is now rejecting the role of the greenhouse effect in the warming trend.


From the WUWT cesspit


Deniers abound in the thoughts under Tim's article. Tim Ball brings out the worst of the worst at WUWT. The comments below are not typical.

Bartemis rejects all the science of the past two centuries in one silly thought:


March 19, 2016 at 10:12 am
The whole brouhaha fails on every count.
1) We are not the main drivers of atmospheric CO2 content
2) If we were, there is no physical imperative that says increasing atmospheric concentration must necessarily increase surface temperatures and, indeed, there is no empirical evidence which confirms that it does
3) Even if we were and it did, warm is better than cold


Evan Jones thinks that floods, fires, drought, famine and storm surges plus rising seas ravaging other parts of the world are a small price to pay for his personal comfort:


Bloke down the pub is a hard-core conspiracy theorist, the core target market of WUWT


March 19, 2016 at 11:17 am
The day will come to pass where the experts will be telling us that the temperature outside is the highest ever, despite there being two foot of snow on the ground. If Joe Public hasn’t realised by that stage that he’s been conned, then there is truly no hope for mankind.


When Luke pointed out that it's probably warmer now than any previous time in the Holocene, he got heaps of comments falsely alleging fraud and academic misconduct, and calling for the paper the deniers didn't like to be withdrawn - on no grounds at all. Marcott13 drives deniers even madder than they already are. 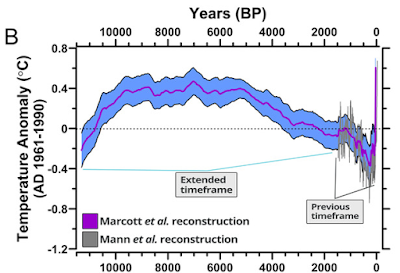 Here is the paper. If you challenge their analysis, please provide a peer-reviewed paper that supports your assertion.
http://content.csbs.utah.edu/~mli/Economics%207004/Marcott_Global%20Temperature%20Reconstructed.pdf


Not a single person took Luke up on his challenge. There were heaps of flames, but the closest anyone came was Chris Hanley, who weirdly proffered up a flawed chart of temperature change on the ice sheet in the middle of Greenland. Utter nutters.


I cannot be bothered with any more of the comments. They show a dark and deadly side of humanity that most people would have never in their life experienced, would never want to, and should never have to. It's what every caring parent wants to protect their child against. If anyone wants to dive into the cesspit of WUWT, you can do so here.