I admit some reluctance in writing this article because I find it hard to believe anyone, even Ross McKitrick, could get it so wrong.  So if anyone finds a flaw in my interpretation, don't hesitate to sing out.  The article I'm writing about is archived here.

Ross McKitrick is an economist who spends time undermining climate science.  As far as I can make out, he sees his job as to try to persuade governments and people to rush headlong off a cliff.  The purpose is not clear. The motives for the immoral behaviour don't really matter.  The fact that it's immoral is enough.

Ross McKitrick is either intellectually challenged when it comes to matters scientific or dishonest.  Since he has an academic background I'll leave it to the reader to make up their own mind.

Today he's written another very silly article and managed to get it published on a very silly Canadian website (archived here).  It's all part of the various attempts by science deniers to get out their denier memes in advance of the IPCC report at the end of this month.


The flaw is this: all the series (both projections and observations) are aligned at 1990. But observations include random year-to-year fluctuations, whereas the projections do not because the average of multiple models averages those out. Using a single-year baseline (1990) offsets all subsequent years by the fluctuation of that baseline year. Instead, the projections should be aligned to the value due to the existing trend in observations at 1990.

Reading Tamino further, the projections should start about 0.1 degree lower to be in line with the trend.

The reason I say Ross is intellectually challenged when it comes to matter scientific is this.  He writes:


The IPCC graph shows that climate models predicted temperatures should have responded by rising somewhere between about 0.2 and 0.9 degrees C over the same period (from 1990). But the actual temperature change was only about 0.1 degrees, and was within the margin of error around zero. In other words, models significantly over-predicted the warming effect of CO2 emissions for the past 22 years.


First of all, if the observed temperature anomaly was within the margin of error, then the models can't be said to have "significantly over-predicted the warming".  As well as that, here's an animation showing where Ross's "should be" rise of 0.9 degrees from 1990 would put the observations:

The black bar shows the AR4 model range (brown range) for the last year of observations on the chart. I've also indicated where the bottom of the range would be if the modeled projections were properly aligned.  Then I've added where Ross McKitrick says the top range should be, with his 0.9 degrees above the 1990 temperature, which would make it around 1.2 degrees.  As you can see Ross's not just a little bit out, he's out by a huge margin.  Even without aligning the modeled projections properly, Ross's "should be" is much further away from the AR4 mean than the actual observations are.

Ross's 0.2 degrees higher than 1990 would bring the temperature up to plus 0.5 degrees, which is above the mid-point of the AR4 projection without even aligning the models properly - as seen below.  So he's way out with the bottom of his "should be" range as well:  Corrected - thanks to Lars Karlsson :) 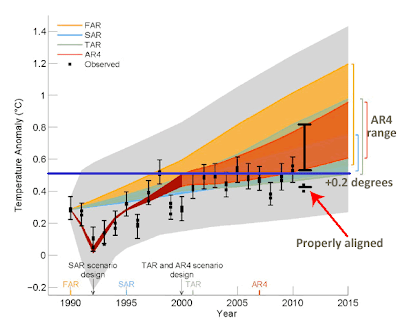 Thing is, one has to be careful with using particular data points.  It's the trend that matters. Ross McKitrick should know better.  Either he does know better and he's a paid disinformer or he's stupid.

Anthony hasn't published this one yet.  I wonder if he will.  He must be finding it hard to choose between all the silly attempts by denialists with all their different spins on something that has yet to be finalised and released.

Note: I initially thought the author of the article was Pat Michaels.  It's actually Ross McKitrick.  And no-one noticed - which just goes to show all science deniers look the same.  Hard to tell them apart  :)
Posted by Sou at 2:44 AM