As OSweetMrMath noticed, Sheldon Walker came here the other day looking for help with a question he had. It turns out he was wanting our advice on an article he was putting together for WUWT (archived here). I think that's really funny. Do you think Anthony Watts appreciates our assistance? :)

He got a lot of help, including from OSweetMrMath but didn't know what to do with it. I sent him over to The Carbon Brief at one point, to where a number of different scientists explained how they estimated the contribution of El Niño to last year's record heat. So over he trotted. Rather than come back to HotWhopper, his next port of call was WUWT where he repeated the errors he made here at HW. Anthony Watts posted the following extremely dumb, extremely wrong claim as his headline to Sheldon's error-ridden article:


Hottest year ever update: El Niño effect in 2015 was 20 times larger than the global warming signal


For example, despite being corrected, Sheldon wrote:


Do you see what Sheldon did?

In other words, he not only mixed up monthly data and annual data, he seems to have decided that without El Niño, the annual global mean surface temperature anomaly would be 0.745C minus 0.3535 C = 0.3915 C. Here is what that would look like: 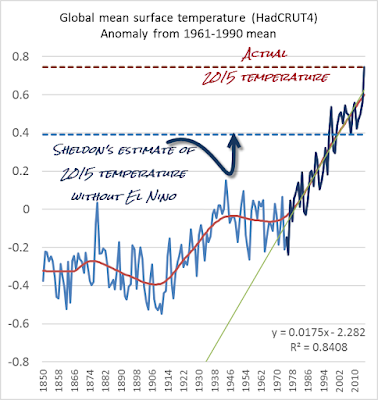 Using Sheldon's numbers, without the current El Niño, the global mean surface temperature would be back to what it was twenty years ago!


Update: In the comments Sheldon clarifies (I think) that he was only meaning to compare the two Decembers. He didn't mean to argue that El Nino contributed most of the warming for the entire year of 2015, only for the month of December 2015. Or I think that's what he's saying. There are still some inconsistencies in his article, if that's the case.
Sou 9:00 pm AEDT 5 February 2016

Except that might not be what he intended at all. He seems to have got himself all confused, despite all the assistance we gave him. He's certainly got me confused (about what he's arguing). He wrote:

But that's not what he calculated. Using Sheldon's estimate, El Niño was responsible for 0.3535 C of warming, which is:

As I said, he came to HotWhopper to seek advice for, as it turns out, his WUWT article. He took part of the advice in that he went to The Carbon Brief as suggested. Thing is, he didn't understand what was written there any more than he understood the comments here at HW. He wrote:

As you read the following quotes, remember that this analysis showed that El Nino was responsible for around 95% of the temperature change between the end of 2014, and the end of 2015. El Nino caused an increase in temperature of about 0.32 °C, but the climate scientists claim that it was only a few hundredths of a degree.

Instead of questioning his own wrong calculations, given what the experts worked out, and being a typical science denier, Sheldon decided that all the experts were wrong and he was right. He wrote the estimates from the experts and seemed to be surprised that they were unsurprisingly close. Sheldon exclaimed:


All of those scientists certainly seem to be singing from the same songbook!


Then, apparently unaware that the scientists did justify their comments in the article at The Carbon Brief, Sheldon added:


I would like to see these scientists justify their comments, using numerical calculations to show where they got their figures from. I have fully documented my method here. If anybody can point out an error in my results, then please let me know.

So I'm letting Sheldon know once more the error in his results. But first, how did the experts arrive at their estimates:

The MEI was explained at The Carbon Brief in letters too large for Sheldon to see:


The MEI is based on six variables which can quantify El Niño and La Niña events – sea level pressure, surface winds in both north-south and east-west directions, sea surface temperature, surface air temperature, and the fraction of the sky covered by cloud.

So where did Sheldon go wrong exactly?

First of all, Sheldon went wrong by subtracting the month of December 2014 from the month of December 2015 and claiming that represented the amount that El Niño contributed to the annual global mean surface temperature for 2015. That gave him an inordinately large difference of 0.3535 C, much greater than the year to year difference of 0.178 C. Thing is, El Niño was only declared in May last year, and it only got big enough to exert a notable influence later in the year. That's roughly illustrated in the chart below, which is a plot of 2015 minus 2014 temperature anomalies for each month:

As pointed out in Roz Pidcocks's article, "it’s important to look at any individual year in the context of the longer trend". Month to month and year to year data is noisy. It's the long term trend that's important.

Sheldon also went wrong in his surprise that the scientists' estimates were not too different.

Sheldon made another error in taking no notice of any of the responses to his question and comments here at HW.

Finally, he went wrong because from here he trotted over to WUWT to repeat his mistakes.

Incidentally, it's expected that El Niño will have a bigger influence on this year's average surface temperature. That's generally the pattern of a strong El Nino. 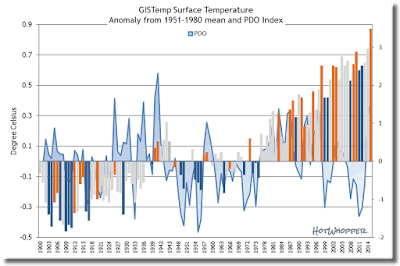 
Pointman builds a strawman. Not every year is the hottest on record. Last year was, and the year before that was, and so were 2010 and 2005 and 1998 at the time. There hasn't been a "coldest year on record" for more than 100 years.


February 4, 2016 at 7:34 am (excerpt)
Every year is the hottest one, every year and every year ad nauseum. No wonder people no longer believe the alarmists.


I thought Werner Brozek was smarter than this. I was wrong, and probably shouldn't have been surprised.


February 4, 2016 at 7:34 am
Thank you for a well presented argument!
By the way, there was a typo in the table. It should be Hadcrut4 and not Hadcrut3


Newminster is a climate conspiracy theorist who is waiting patiently for "one day":


February 4, 2016 at 7:47 am
Personally I find nothing at all surprising in climate scientists talking up the global warming aspect and underplaying the El Niño contribution.
It’s what they do, but it will catch up with them one day.


hswiseman suffers from confirmation bias, has a vivid imagination,  and seems to think that the oceans decided to warm up the world by magic:


February 4, 2016 at 7:57 am
It was hysterical watching the warmists cheer on the El Niño like it was some kind of a football game. They were too ignorant to realize that the huge temperature forcing impact of El Niño and oceanic circulation in general implicitly revealed the minimal forcing effect of additional carbon dioxide upon atmospheric temperature. The oceans are the big dog in the temperature story. Carbon dioxide is just a bunch of fleas on the dog.


D. J. Hawkins wonders if scientists, who first told him about such things as La Ninas and El Ninos, will tell him again how La Nina cools the surface. Or maybe he thinks they will tell him something different from what they've told him up to now:


tadchem tries to give the WUWT-ers some home truths. They take it the wrong way (maybe tadchem is a denier and didn't see the irony)


Steven Mosher, in a very long comment for him, pointed out an invalid assumption from Sheldon, and more:

...For grins.. take your time series and make a time series going back to 1880 using only el nino years
Do the same for La Nina

Here it is, going back to 1900 (as far as I could go). I added a 3rd order polynomial trend line, which seemed about the best fit, but don't take that as gospel: 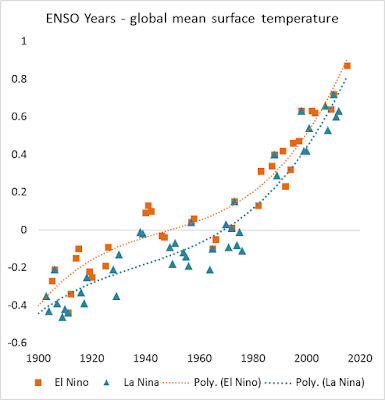 kokoda is so far into denial that he or she cannot accept any evidence of global warming, no matter how strong, and prefers to believe that climate science is a hoax:


February 4, 2016 at 9:01 am
We can stop pretending that Global Warming (AGW) has a statistically scientific impact on global climate when there is no evidence for the claim (besides deception, conjecture, and hyperbole).


kokoda later admits that for him or her, numerical analysis is not important.


Scottish Sceptic is another WUWT climate conspiracy fruitcake of the type treasured by Anthony Watts:


February 4, 2016 at 8:54 am
Why use discredited surface data which everyone knows is fraudulent?

Analysis: How much did El Niño boost global temperature in 2015? - article by Roz Pidcock at The Carbon Brief, 26 January 2016