Right up the top of a WUWT search on Twitter: 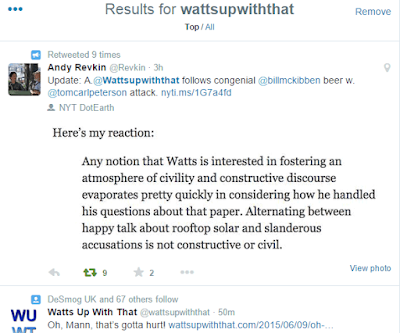 For what's gotta hurt - see this.

I might need to explain - if the link no longer shows it. I caught a coincidental juxtaposition, a tweet from Andy Revkin sitting right above a tweet from Anthony Watts - in the WUWT twitter timeline.

Andy Revkin's update has got to hurt Anthony. Andy's tweet was sitting right on top of a tweet from Anthony Watts. Anthony was gloating that the book "Climate Change the Facts" is rated higher at Amazon than the new (2nd) edition of the book Dire Predictions

I happened to grab a screenshot of them both one sitting on top of the other. It struck me a funny at the time. You probably had to be there :)

The second edition of Dire Predictions

(print version) is moving up the ranks quite quickly, incidentally. It's already at #34 in Books > Environmental Studies and #56 in Books > Climatology. I'm told the Kindle version will be out in July.
Posted by Sou at 4:27 PM