On pace for rapid warming, while Anthony Watts laughs at live dragons at WUWT...


Today Anthony Watts has an article with the headline:


Laughable modeling study claims: in the middle of ‘the pause’, ‘climate is starting to change faster’


Then he put up the shonky chart from Roy Spencer and John Christy (see here and here), without identifying it or explaining how that pair managed to deceive the willing. Though he does provide a link to a WUWT article about it.

Anthony thinks it's really funny that global warming means that the world will most likely be heating up faster than ever in human history. Some say it will be at a pace ten times faster than any period in the last 65 million years.


The world will probably continue to heat up faster and faster


The paper is describing a study that was investigating the rate of temperature increase, particularly on the regional scale. The scientists were looking at changes we can expect over the span of a lifetime. The time periods they chose were forty years, representing about a generation and the planning time frame needed for major infrastructure projects (eg water storage, roads, bridges, outmoded electricity generation, etc).


The team first worked out the pace of temperature change between 1850 and 1930. Over this time period people had started to keep records of surface temperature, but there hadn't been a huge rise in greenhouse gases. The scientists compared the rates of change over this time span with estimated temperature changes over the past two thousand years.  The two thousand year temperature record was obtained from various reconstructions based on temperature proxies such as corals, ice cores and tree rings. This gave them a baseline of natural variability. For example, over North America and Europe, in any forty year period, surface temperatures can fluctuate by as much as +/- 0.2°C in a decade just from natural variation.

They compared the results to those of climate models and found they broadly agreed with the amount of natural fluctuation in surface temperature. This provided a measure of confidence in using models for projections.

The paper provides a lot of detail. For example, it discusses how models and PAGES2k reconstructions show differences between regions in regard to the amount of variability. (Australia has lower rates of change than some other regions, for example.)


Greenhouse warming has raised rate of increase in surface temperature


Having found broad agreement between climate models and records going back in time, the scientists then projected forward in time. They worked out 40-year rates of change between 1971 to 2020. What they found was, not surprisingly, that climate is changing faster now than it was in the past. For example, they found that over North America, surface temperatures increased at around 0.3°C a decade. This is more than can be attributed to natural variability.

The chart below illustrates what the scientists found in regard to the rate of change of surface temperature in °C a decade. The rates are measured in 40 year windows of time, going from 1900 to 2100. The thick grey line shows the global rate of change. The others show the rate of change for the different regions of the world, with the Arctic sticking out like a sore thumb. North America and Europe also stand out from the rest.


The reason the scientists looked at regional trends (see above) was because it's at the regional level that we'll need adaptation strategies. The global average doesn't say much about what will change where - which regions will be affected at which times and in what manner.

The paper itself goes into quite a lot of detail and discusses uncertainties such those surrounding aerosol forcings. It also mentions the current rate of change in surface temperature:


Like the projections from more complex models, these results do not capture the recently observed decrease in the rate of warming. Owing to internal variability, such a temporary slow-down is neither unusual nor unexpected, and is consistent with our analysis of historical rates of change where recent warming does not stand out when examined over 20-year time periods (Supplementary Fig. 2). The specific mechanisms at work are still a subject of research.


It is the conclusions that are drawn which are of greatest concern. The research suggests that because of greenhouse warming, we are now going to be facing "background rates of climate change ... well above historical averages until at least mid-century." and that the "accelerated rates of change noted here mean that impacts related to rates of change will intensify over the coming decades".


Anthony Watts rolls his eyes at these findings, though they are not inconsistent with what has been reported previously.

I can easily imagine that Anthony Watts' eyes roll around in his head a lot. He doesn't make much sense at the best of times. In this case, he seems to think it sufficient to write a silly headline and opening sentence on top of his usual lazy copy and paste of a press release. I say it's lazy, but really I think Anthony copies and pastes because he's not capable of understanding and interpreting science. He usually, but not always, knows his limits in that regard, unlike the interpreter of interpretations.


As you can imagine, the WUWT comments spanned the spectrum from groans about using models to work out what the future will bring, instead of, say, tea leaves - through to an ice age cometh. Here's a sample:

Scottish Sceptic is a science denier and it looks as if he's a hard-core greenhouse effect denier who suffers bouts of hysteria:


March 9, 2015 at 9:12 am
Climate variation has not changed at all over the 350 years of CET.
Proof: recent temperature trends are not abnormal
However, I’ve now started look at HADCRUT4 and am seriously thinking there is a pattern suggesting marked cooling peaking around 2030.
So when I saw that above graph with a peak around 2030 I nearly split my coffee I laughed so much.

As usual, Scottish Sceptic is talking through his tam o' shanter. Below is a chart showing the large change in the temperature trend in recent years. It compares the trend from 1772 to 1950, which was around 0.2°C a century (blue trendline), with the trend from 1950 to the present, which is around 1.7°C a century (red trendline). 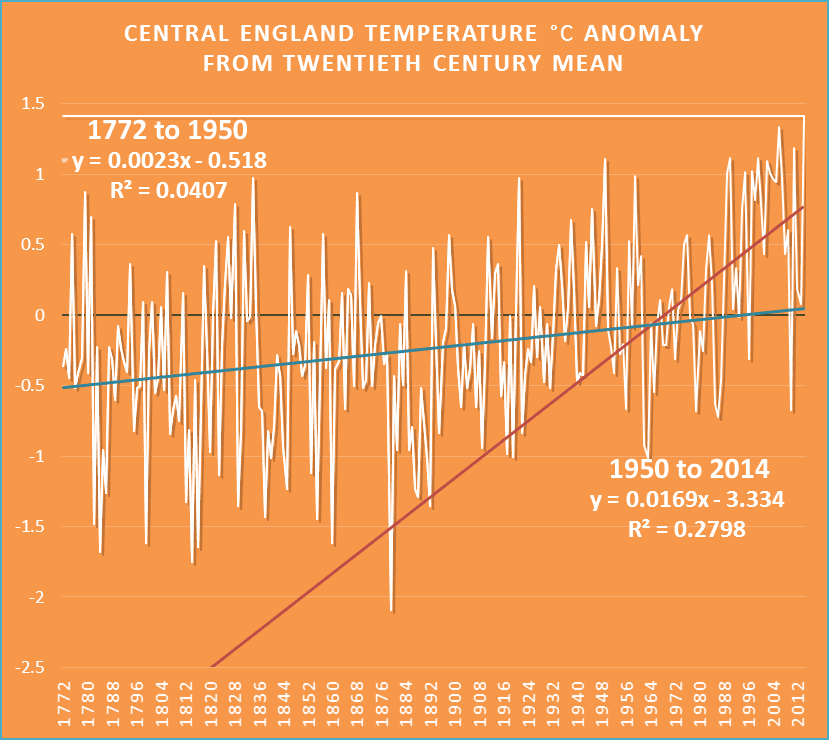 mikerestin demonstrated that he doesn't know how to read a chart. He wrote, in reference to the chart in the main article above:


Does anyone bother to correct him? Nope. (The chart doesn't go negative at all. The only times it got below zero were in the twentieth century.)


More than one person spoke about the scientists being on drugs. M Seward, for example, wrote:


March 9, 2015 at 9:23 am
Steven J. Smith, James Edmonds, Corinne A Hartin, Anupriya Mundra, and Katherine Calvin
Names to remember? I think not.
Did they analyse the relative contribution of ‘adjustments’ ?
Do you think they were off their medication?


Erny72 didn't bother reading the press release let alone the paper. He missed the parts about observations and 2000 years of temperature reconstructions. He also mistakes CMIP5 models for spreadsheets. Talk about "delusions of adequacy" - I'd say Erny wouldn't even make the cutoff to be accepted into a Dunning & Kruger experiment.


March 9, 2015 at 11:45 am
Five people in a ‘team’ and all they have to do is run a spreadsheet and press ‘update links’ once the sums are done by the computer model. They didn’t go out into the field and measure anything, nor even write any ‘cutting edge’ new model if I read this correctly. Just update links once the compuker finishes the number crunching.
So while one post graduate does that, what are the other four people doing? Sitting around repacking the bong or brewing up a new pot of herbal tea now and then?
What is written on the toilet walls above the bog rolls at Northwest laboratories? “Climate Science papers; please take one”?


MarkW is an ice age comether:


March 9, 2015 at 9:34 am
With the sun past peak and beginning to slow down, they are going to need some serious adjustments to cover up the soon to come cooling.

pochas tries to sound sciency - about as sciency as any other crank from WUWT:


March 9, 2015 at 9:28 am
All these models assume the troposphere is in radiative equilibrium, when actually it is in convective equilibrium, unaffected by fluctuations in greenhouse gasses.


norah4you isn't concerned about learning how to spell, but she does think that WUWT-ers ought to learn some basic science. That is what she's saying, isn't it?


March 9, 2015 at 9:34 am
Wouldn’t it be cheeper for the world to send the uneducated back to school to learn Basic Math, Geology, Physic and Chemistry?
or else:
When will they ever learn?


Michael D refers to the shonky chart from Roy Spencer and John Christy, that Anthony posted and asks:


He wasn't the only one who queried the chart. Makes you think that if Anthony had said it was prepared by Michael Mann, the fake sceptics would have been all over it pointing out the errors.  Because it's from Roy Spencer, the deniers who know its shonky provenance give it a free pass.

There's a whole lot more, mostly from the 8% Dismissives who are incapable of writing anything more meaningful than "climate science is a hoax". You can read the comments here if you're curious.

Related press release: The climate is starting to change faster