You'll see these silly lists pop up from time to time on denier websites all over.  A list of supposedly "failed" climate predictions.  Many of them you won't find anywhere else at all.  It's as if the deniers just made them up.

"Surely they wouldn't stoop so low", I hear you say.  Oh, you didn't say that at all?

Anthony Watts has just put up such a list (archived here).  He said it was a list to answer the question of "what was predicted by scientists and activists 25 years ago that would be a result of global warming." and "The original post was asking for a list of failed climate predictions".

Thing is, I only counted fifteen of his 107 predictions that were made 25 years or more ago.  All the rest were more recent.  And of those fifteen, only eight were about global warming.  In fact quite a few of them were about global cooling and some weren't about either warming or cooling but something completely different.  So not only does Anthony fail arithmetic but he can't even stick to the subject he himself chose.

Here are some others that he reckons are failed predictions.  Let me know what you think of their failure:

1. “Due to global warming, the coming winters in the local regions will become milder.”
Stefan Rahmstorf, Potsdam Institute of Climate Impact Research, University of Potsdam, February 8, 2006


I couldn't find any trace of Professor Rahmstorf saying this, though it was plastered all over a lot of denier websites.  I can say, without a shadow of doubt, that winters in my local region have become milder.  I don't know about yours.


If he did say it, then I'd rate this as scientist pass; deniers fail.


Here's another prediction that Anthony Watts (and a zillion other denier websites) say has failed:


3. “More heat waves, no snow in the winter… Climate models… over 20 times more precise than the UN IPCC global models. In no other country do we have more precise calculations of climate consequences. They should form the basis for political planning… Temperatures in the wintertime will rise the most… there will be less cold air coming to Central Europe from the east…In the Alps winters will be 2°C warmer already between 2021 and 2050.”
Max Planck Institute for Meteorology, Hamburg, September 2, 2008.


Between 2021 and 2050?  How do they know it has failed? Perhaps these deniers have a time machine.  Incidentally I did a search of www.mpimet.mpg.de for that quote. I couldn't find it.  That doesn't mean it doesn't exist.  The deniers have obviously chopped so much out of it to try to squeeze it into a "failed" prediction.  Strange they left in the part about 2021 and 2050 though.

The European Alps are certainly getting hotter.  In the Executive Summary of this OECD report, is written:


The Alps are particularly sensitive to climate change, and recent warming has been roughly three times the global average. The years 1994, 2000, 2002, and particularly 2003 have been the warmest on record in the Alps in the past 500 years.

There are lots more like the above.  There are also lots of quotes from magazines and newspapers.

I have to say that most of the quotes Anthony Watts seems to regard as being a failed prediction are either or both:

I saw a tweet today that made me wonder if I should take the first step towards forgiving WUWT:


Lots of them aren't buying the list.  Some are falling for it, but they are as bad as Anthony Watts or even worse, if possible.


April 2, 2014 at 11:20 am
Wow.. this post is of a quality that I’d expect from spam email. It is extremely poorly sourced. Most entries are completely devoid of context about the range of time these predictions are supposed to occur by, and there are even predictions that specify ranges of years that are still decades away, yet are somehow already considered “failed.”


April 2, 2014 at 11:21 am
You can’t know that those are failed predictions. They might have come true in an alternate universe.


April 2, 2014 at 11:23 am
“In the UK wetter winters are expected which will lead to more extreme rainfall, whereas summers are expected to get drier. However, it is possible under climate change that there could be an increase of extreme rainfall even under general drying.”
Telegraph, Dr. Peter Stott, Met Office, 24 July 2007
==============
About the only one correct, for this year at least


April 2, 2014 at 11:33 am
They seem to dislike skiing very much. I would like to know the actual impact of those failed prophecies on the skiing industry. Calling to stop investment on the basis of unsupported regional models is a bit nasty (number 26).


He's talking about this one, which is pretty funny:


98. 1969, Lubos Moti, Czech physicist: “It is now pretty clearly agreed that CO2 content [in the atmosphere] will rise 25% by 2000. This could increase the average temperature near the earth’s surface by 7 degrees Fahrenheit. This in turn could raise the level of the sea by 10 feet. Goodbye New York. Goodbye Washington, for that matter.”


April 2, 2014 at 12:10 pm
Rarely do I side with the AGW point of view, but to call these “failed predictions” is really stretching it. Some are notable, but very few.


G. Karst makes an astute observation.  The list of "climate fails" from deniers is getting bigger all the time while that from scientists is, sadly, almost non-existent.  G Karst says:


Surprisingly, there were a few deniers who thought the list was silly.  But most people who comment at WUWT are, as expected, fake sceptics or weirdos who can't see that the listed predictions had either already come to pass or were about the future.


Resourceguy apparently reckons WUWT is a den of illiterati. At least I assume he's talking about WUWT when he mentions anti-learning and says:


April 2, 2014 at 12:10 pm
Definitely a keep, but the failed predictions after this point will still grow exponentially anyway because we live in the era of anti-learning and anti-empirical evidence, right NYT, BBC, and others?


groovyman67 wants every high school, college, university, news station, et al to know how dumb they are at WUWT and says:


April 2, 2014 at 12:58 pm
This list should be more thoroughly completed, continually updated, and have the names and employer of each listed. Then nailed on the door of every high school, college, university, news station, et al as the ’107 theses’. If there is no accountability for these predictions there is no stopping them.

Since there is no desire for accountability, rather a desire to cover up, among the warmists (formerly coolists) perhaps the route to go is loud, obnoxious and ongoing predictions of 0 degree temperature change by 2034, ice caps will be almost exactly the same in 2064. This will only work if the manner in which it is presented draws attention, since it’s not fearmongering it will be considered non-newsworthy.


April 2, 2014 at 1:03 pm
It is important to remember the names and faces of the people who caused all of this CAGW mayhem.

Question:
Is there a similar list of skeptical failed predictions or are the climate skeptics too “proper science minded” to make unfounded predictions?


John, if you're over this way, check this out!  This one by Pierre Gosselin who predicts minus 2.5 degrees Celsius by 2020 is up there with the best of them. It's not 2020 yet, but I think it's fair to say that unless there's an asteroid strike or a supervolcanic eruption, it will fail.  Back in 2008 he wrote:


My prediction is we’ve started a nasty cold period that will make the 1960s look balmy. We’re about to get caught with our pants down. And a few molecules of CO2 is not going to change it.

Yet only two years later, we had the equal hottest year on record. Here's what his prediction would look like in the context of the prior 140 years. 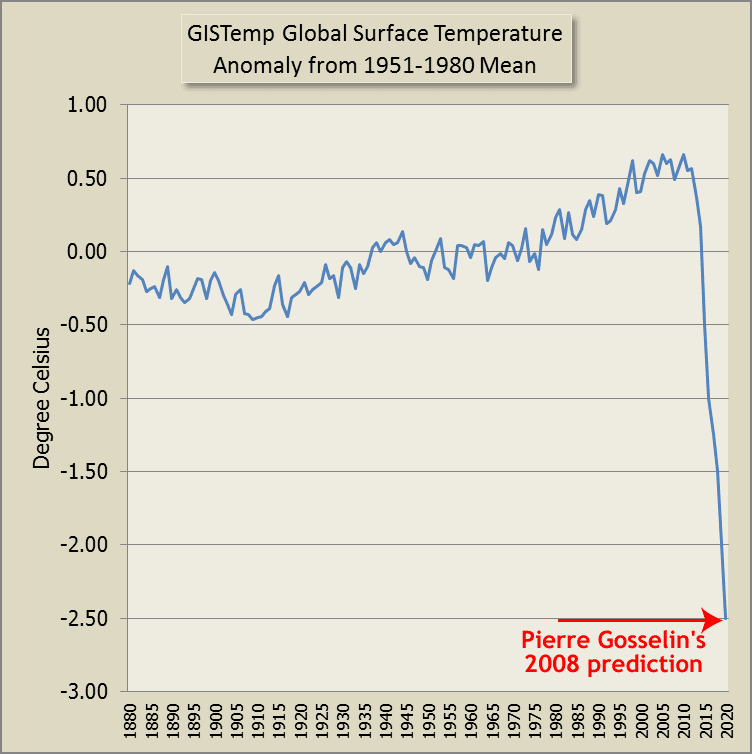