Today Roy Spencer put up a chart from John Christy on his blog (archived here) and wrote:


...over the period of the satellite record (1979-2012), both the surface and satellite observations produce linear temperature trends which are below 87 of the 90 climate models used in the comparison.

Let's just do a quick fact check.   First of all, he's wrong.  Even in his wonky chart (scroll down the page to see it) it's only their own satellite record that's "below" "over the period of the satellite record".  The surface temperatures don't drop below the bulk of the models until the tail end of the observations, from around 2008 onwards.  So I looked more closely at his chart and what I noticed was:


Now that's odd, I thought. I've previously compared UAH and GISTemp and noted how similar they are over time.  So how is it that they diverge so much in Roy's rendering?

Then I saw a question by Steven Mosher.  He asked:

Now why would John Christy use such a short period of time as a baseline?  The normal period used is 30 years.  Four years is a very short period for a baseline.  So I ran up a couple of charts and you can see the difference for yourself.

This first one  shows UAH (lower troposphere) has higher and lower extremes than the surface temperature but they track each other fairly closely.  This is using a 30 year baseline from 1981-2010.  Take note of the fact that 1983, John's start year, lies above the trend. (Click to enlarge.) 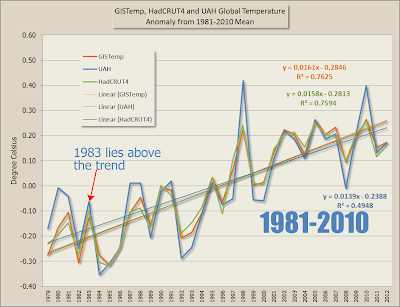 This next chart is using John Christy's four year baseline 1979-1983.  If you compare the top and next chart below you'll see why UAH diverges so much.  The first three years of UAH are quite a bit above the surface temperature.  They come together more from 1982 onwards.  Using a four year baseline from 1979-83 shifts UAH down lower compared to the surface record. (Click to enlarge.) 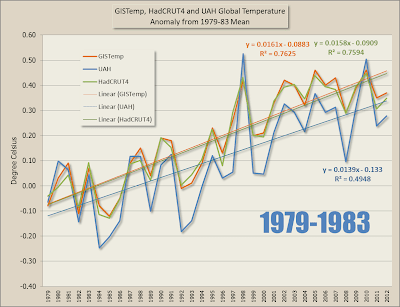 Neat trick of Roy and John Christy?  What do you think.  Should we use that trick whenever we want to argue how different the satellite record of the lower troposphere is from the average global temperature of the land and sea surface?

I haven't plotted the model runs that Roy and John did, but I do have some questions for them.  I'll show their chart first, then ask the questions. (Click to enlarge.)

I have four three questions:


Now let's see how the models are reported in the IPCC report. (Click to enlarge.)


I must say that John Christy messed up his model runs, comparing John's chart to the IPCC chart above. Unlike in John's chart, there is no point at which the models all converge in the IPCC chart.  As well as that, while the observations are at the low end of the models right now, that wasn't the case back in the 1980s and 90s.  John Christy's chart shows UAH diverging from the get go way back in 1983.

Later addition: --o--The fact that 1983 lies above the trend line (see top chart above) probably means that John's model runs, which start at zero in 1983, are too high.  It's the same problem as discussed elsewhere when people were looking at an early draft of the IPCC report.--o--

Shall we just assume that John Christy and Roy Spencer are having a little fun at the expense of Anthony Watts and other science deniers?  Anthony Watts reposted Roy's article at WUWT and he didn't have any notice to indicate he knew it was a joke.  In fact Anthony seems to think Roy is serious.  He writes:

Well, Anthony it's not reality.  It's just a more mischief from John Christy and Roy Spencer.  It gives Wondering Willis' a chance for payback if he cares to take it.


This article has brought out the lowest common denominator of denier at WUWT.  There is almost no-one querying the chart or making a useful comment.  It's just chanting of "all the models are wrong", "scientists don't know nuffin'" and "it's not CO2".  And Anthony boasts about his website?  Seriously?  Click for archived WUWT version with comments.


JustAnotherPoster says something rather garbled.  In between his "all the models are wrong" chant, something went wrong between the keyboard and brain?


October 14, 2013 at 2:15 pm
As RJB would state. The really clever work now would be to bin all the model that are failures and investigate why the two at the bottom have matched reality and what they have assumed compared with the failed ones.


Jimbo is not at all sceptical of John Christy's chart and says:


October 14, 2013 at 3:43 pm
There are 3 words that Warmists hate to see in the same paragraph. These 3 words can cause intolerable mental conflict.
*Projections, *observations, *comparisons.

At one of the IPCC insiders’ meetings they knew full well that there was a problem. Some bright spark must have suggested that they simple pluck a new confidence number out of thin air otherwise they would be doomed (and shamed). Desperate times call for desperate measures. Just look at the graph. You won’t see this kind of behavior in any other science.

shenanigans24 sees what he wants to see and doesn't question anything either:


October 14, 2013 at 4:02 pm
I would say 100% are wrong. The fact that 2 or 3 haven’t overshot the temperature doesn’t make them right. They aren’t following the observed temperature. It’s clear that none of them simulate the actual climate.


October 14, 2013 at 4:21 pm
Friends:
Some here seem to think rejection of the models which are clearly wrong would leave models which are right or have some property which provides forecasting skill and, therefore, merits investigation. Not so. To understand why this idea is an error google for Texas Sharp Shooter fallacy.

Models which have failed to correctly forecast are observed to be inadequate at forecasting. Those two (or three?) which remain are not known to be able to forecast the future from now. One or more of them may be able to do that but it cannot be known if this is true.
Richard

John Franco hasn't yet woken up to the fact that deniers can change their tune on a whim.  He's looking for some denialist consistency and can't find any at WUWT.  He says:


October 14, 2013 at 4:47 pm
I’m still confused why we care about HADCRUT. I thought WUWT demonstrated that half the “warming” came from bad ground stations and other fudge factors. I also thought another article on WUWT demonstrated that that HADCRUT takes advantage of some bad mathmatics to suppress temperatures early than 1960, especially the high temps of the 1940s.


Unlike most deniers who say it's all too complex, Latitude reckons climate is very simple and says:


October 14, 2013 at 5:02 pm
Richard, I see it as simply not willing to admit that CO2 isn’t as powerful as they want it to be….
covering it up and justifying it with “aerosols” etc….
That way they can still blame it all on CO2