On forcing and feedback with Willis Eschenbach

Willis Eschenbach maintains, despite all evidence to the contrary, that climate doesn't change. He seems to think that every time a forcing is applied, it will be met with an equal and opposite force. Today he's arguing the same thing that he's argued time and time again.

As in the past, Willis gets quite a bit wrong (archived here):


This article is about some fundamental concepts in climate science, mainly for the benefit of people new to the subject. (You'd think deniers at WUWT, who've been writing about climate for years, would have grasped these concepts by now. But many of them, like Willis Eschenbach, haven't.)


Forcing and feedback - positive and negative


So how about some clarification of the terminology. In this article, I'm using simplified examples to illustrate the main points. It can take a bit to get your head around at first if you're not used to the jargon. It's really not that difficult to grasp, once that light bulb turns on.

Forcing - something that causes a change in a particular direction. In climate, the primary cause of a rise or fall in global temperature.

Climate forcing is something, usually external to the system, that causes a change. Let's take something simple: incoming solar radiation. The energy from the sun heats up Earth. If the sun increases the amount of energy it's putting out, then the climate will be forced and the temperature will rise. If nothing else happened, the planet would continue to heat up for as long as the sun kept increasing the energy. Once the sun stopped increasing the energy, the planet would settle down to a new energy level and temperature. If the sun then reduced the amount of energy it put out, there would be a negative forcing and, if nothing else happened, the earth would cool.

Here is a diagram showing a positive forcing with a single positive feedback: 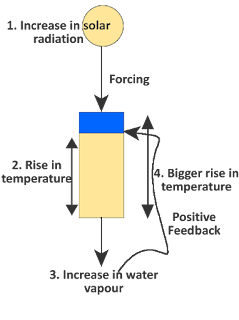 Willis Eschenbach gets all caught up in terminology. He doesn't know the difference between forcing and feedback and writes:

Yes. By definition, a change in radiative forcing of a system will cause a change in temperature, all other things being equal. When there is an increase in energy in the system it will heat up. A drop in energy cools the system. Willis continues:


On the other hand, I’ve proposed that there is a natural governing system regulating the temperature of the climate, a major part of which works as follows.

Here Willis is confusing forcing and feedback. Willis talks about solar forcing. Solar forcing comes from outside the system. It comes from the sun itself. Any cloud response is a feedback, not a forcing. What happens on Earth will make no difference to how much solar energy is put out by the sun. In other words, whether or not clouds form will make not one jot of difference to the forcing. Changes in clouds can be a feedback (as above).

No, he's wrong. The change in temperature can cause feedbacks. It won't change the forcing, which in Willis' example of solar forcing is the increased amount of energy hitting the top of the atmosphere. The feedback in regard to the water cycle in the tropics could be as follows, assuming an increase in solar forcing (more energy from the sun):


And that is why I say that the current method of analyzing the climate is totally incorrect, because it assumes the causation is going the opposite direction from what is actually occurring.

It's Willis who has it wrong. In his example of solar forcing, if the sun increases its output, then earth heats up. There will be feedbacks on earth in response to the rise in temperature. As long as the forcing operatres, all that those feedbacks can do is either:

You'll not get a reversal or any change in the forcing itself. How could you? Earth has little to no control over the sun. The sun is much more powerful.


Willis and his governors


Willis started off his article talking about governors and cruise control. He got that wrong too, as he has done before. With the biggest sub-group at WUWT being engineers, there were lots of people ready to point out his errors - as there have been on previous occasions, when Willis took just as much notice (ie none).


Mike quotes Willis and points out some of where he goes wrong:


August 2, 2015 at 2:22 am
“A common example in our daily lives is the cruise control on your car. It increases or reduces fuel flow (positive and negative feedback) to maintain the vehicle speed near some pre-set value."

Willis , you really need to find out what the terms mean if you want to discuss this kind of thing.

If a hill slows the vehicle down, the cruise control acts as a negative feedback by increasing the gas.


August 2, 2015 at 5:07 am
Ditto.
The Stefan-Boltzmann law is a governor of sorts, increasing or decreasing radiation by the 4th power in an effort to maintain a temperature.


charles nelson is amazed by Willis:


August 2, 2015 at 3:05 am
A governor is a governor. Feed back is feedback. Totally different animals. Next thing you know , people will be saying that CO2 is a control knob

To which Mike replied:


August 2, 2015 at 4:51 am
It’s interesting to learn how engineers define and use “positive” and “negative” when discussing feedback but for laymen Willis’ example is clear no matter how feedback is defined: a changing temperature can change forcing to one which acts to reverse the temperature change. At least that’s how I see it.