Well, well, well. It had to happen sooner or later I suppose. Anthony Watts has added astrology (or as good as) to the weird and weirder articles he promotes (archived here, latest here). He tried to wriggle out a little bit by writing at the top of his article:


[Note, I don’t necessarily agree with the conclusion this publication, as it smacks of barycentrism, which I don’t give any credence to, but it does discuss some other concepts, and  I thought it might make for an interesting and entertaining discussion – Anthony]

All that does is emphasise what his good friend Willis Eschenbach wrote about Anthony:


Even if Anthony had a year to analyze and dissect each piece...(he couldn't tell if it would)... stand the harsh light of public exposure.

Here's an excerpt from his astrology article, which was from his guest Brian T. Johnston:


I'll skip all the middle bits, and all the drawings of sine curves and triangles, and jump right to the end:


As a final observation the people have always looked to the sky to try to figure out why changes are occurring on the earth. Until the present time it has been nearly impossible to correlate any astronomical events with events on the earth. Now we can see that indeed the planets affect events on the earth in an extremely profound way. The Cattle Cycle drives most of the other economic cycles of the world and the stresses placed upon the system result in wars, famine and disease. All of these changes may be ameliorated by being able to predict what these changes will be in the future and to adjust the various markets to better handle the cosmic changes which are at the foundation of the entire system.


His cattle cycle, by the way, had to do with beef prices and stock numbers - which are affected by earthly factors rather than celestial ones (see here and here).

What is most enlightening, I'm sure you'll agree, is the astrological circuit diagram that Brian T. Johnston kindly provided: 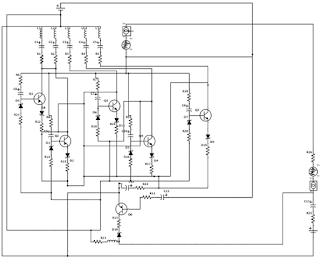 
I found some other gems from Brian T. Johnston, which you'll find equally awe-inspiring. I'm only guessing it's the same author and I could be wrong:


From HotWhopper - An economist should know better, maybe ...but what about Anthony Watts?

Most of the people commenting were not quite as impressed as Anthony Watts. Had they been asked, most probably would have suggested to Anthony that it was going a bit too far, even for WUWT. Although they don't complain about Tim Ball's fanciful if paranoid conspiracy theories, so maybe not.


August 16, 2015 at 11:03 am
Simplicity of the J-S magnetic fields driver has not been surpassed by any existing hypothesis

Mark from the Midwest had a more mundane explanation for the cattle cycle:

August 16, 2015 at 11:10 am
If you look at the cattle price graph, above, you can see that the peaks are related to periods of higher fuel prices, 79 end of the Carter Years, 91, Kuwait and Desert Storm, 2005 Katrina, et al. Cattle price fluctuations have always been tightly linked to the cost of production inputs, particularly diesel. So it’s odd that the position of two very large planets should be so closely linked to the cost of diesel fuel.


August 16, 2015 at 11:25 am
Can’t speak about planets and orbits with any authority, but the the circuit shown is either incomplete or makes no sense at all, and the explanation of transistor operation, bases, emitters, collectors, and vacuum tube details and theory of operation are infantile and often … confused.

ShrNfr was vaguely sceptical about it, but a fake sceptic when it comes to climate:


August 16, 2015 at 11:29 am
This sounds a lot like Post Hoc Ergo Propter Hoc to me in a number of areas. Of course, if you can distill this into a thing that will make predictions and those predictions are validated, you are doing a lot better than all the GCM models flying around.
The hypothesis that the solar magnetic field effects the temperature of the earth seems to be not disproved, but beyond that I think that there is a need to formulate a prediction model (even if only on a statistical basis) and then test against the future. Color me agnostic till then on the J-S effect.
“Truth is what works.” – William James.


joelobryan is boasting about how he can't tell real science from pseudoscience:


August 16, 2015 at 3:21 pm
40 years ago, when I was in the 9th grade, I had football coach teaching the health class I was in. He taught us about biorythms, like it was established medical-physical fact. We all unquestioningly lapped-it-up since it must have been true , coming from our teacher. Pure bunk presented as established incontrovertible fact. The 1970’s was a decade full of BS pseudoscience. Society and societal norms were in turmoil after a dozen years of sexual revolution, anti-war activism, declining family values. People were looking desparate for meaning in their lives.
I can just imagine that is what is happening in today’s high school biology and ecology classes vis-a-vis climate change alarmism. The 2nd decade of the 21st century seems to also be a decade of pseudoscience. Social norms are in turmoil and people are searching for some mystical meanings, hidden from view, in our short lives. Biorythms in 1975. Climate change-Save Gaia with carbon taxes in 2015.


M Seward explains that he would take astrological science over mainstream science any day:


August 16, 2015 at 3:43 pm (excerpt)
I agree to a point that the article is a bit like trail mix but then again trail mix is good for you when you are on the trail, certainly better than the peanut butter and jello sandwich that mainstream climate science is serving up.


One wonders why ntesdorf visits the blog that claims it's ".the world's most viewed climate website"


August 16, 2015 at 3:30 pm
The important, refreshing and significant thing is that he is not wittering on endlessly about CO2 and imminent Doom. He is actually looking at interesting things,