Resurrecting Fred Singer and the MWP at WUWT


As if anyone needed more proof that WUWT is just another outlet for anti-science disinformation propaganda.  Today Anthony's put up a pack of lies by Fred Singer (archived here), who's made it his business to invent disinformation.  The article is another "hockey stick is a fraud" article.  Wouldn't it be nice if Fred Singer and Anthony Watts were added to one of the cases currently being heard in the US courts.


Fred Singer Manufactures Lies and Dispenses them at WUWT


Here is some of what Fred wrote in today's WUWT article:


...the Hockeystick is a manufactured item and does not correspond to well-established historic reality. It does not show the generally beneficial Medieval Warm Period (MWP) at around 1000AD, or the calamitous Little Ice Age (LIA) between about 1400 and 1800. In the absence of any thermometers during most of this period, the Hockeystick is based on an analysis of so-called proxy data, mostly tree rings, from before 1000AD to 1980, at which point the proxy temperature suddenly stops and a rapidly rising thermometer record is joined on.

Talk about "manufactured items".  Here are a few "hockey sticks" from the IPCC AR5 report.  I've indicated the times that are usually referred to as the MWP.  There's no fixed period.  I've also indicated the Little Ice Age - and you can see that in the case of the Little Ice Age there was cooling overall.  In the Medieval period most reconstructions in the Northern Hemisphere show a slight warming particularly starting around 950, but not so much in the southern hemisphere.  Globally there's a slight bump around 950.  So Fred's wrong on that score.  Nothing been "disappeared".  It's just that with more and more data the record is becoming more refined, but there are still differences in the different reconstructions - that aren't being hidden by anyone.  Click for larger image as always.


Fred bemoans the "good old days" when knowledge was scarce


Fred puts up a couple of drawings in a single image.  At the top of the drawing below is one of the images Fred included and at the bottom I've included a diagram from the first IPCC assessment report, published 24 years ago in 1990. This was before there were any global temperature reconstructions of the type we have today.  Fred is still living in the dim distant past.  He's getting on a bit (he's 89 years old) and can't hack this modern society or cope with new knowledge. 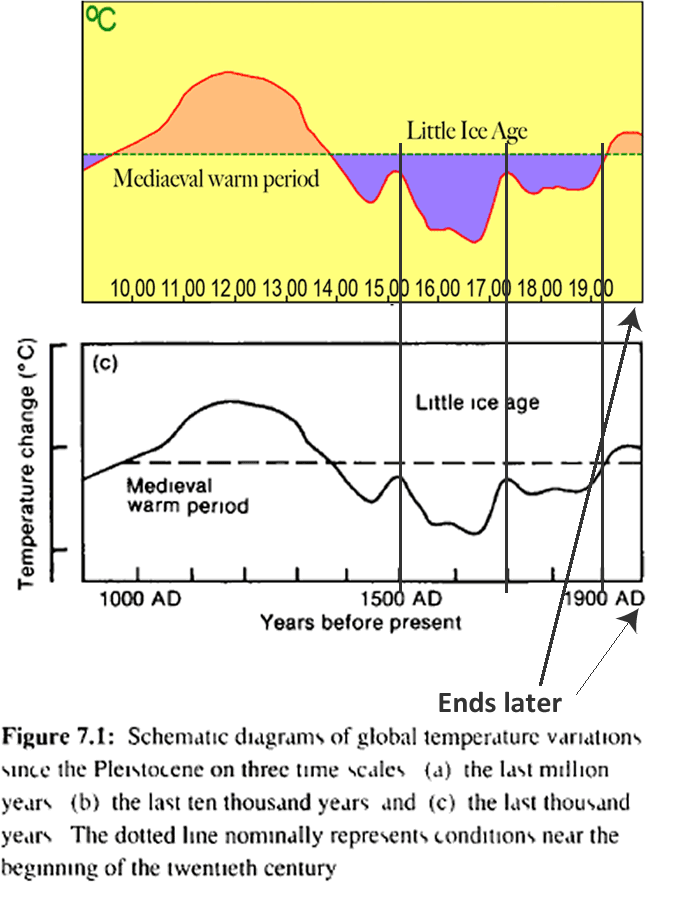 I don't know why Fred shifted the timescale to the left in his diagram above.  He could have left it as it was in the FAR report.  Anyway, about the Medieval Warm Anomaly, this is from FAR:


The late tenth to early thirteenth centuries (about AD 950-1250) appear to have been exceptionally warm in western Europe, Iceland and Greenland (Alexandre 1987, Lamb, 1988) This period is known as the Medieval Climatic Optimum China was, however, cold at this time (mainly in winter) but South Japan was warm (Yoshino, 1978) This period of widespread warmth is notable in that there is no evidence that it was accompanied by an increase of greenhouse gases.

If you look at the top chart above and then the one below, you can see the difference between what was known in 1990 with what is known from scientific research conducted since that time. You can also tell from the text.  Compare the extract from FAR above with the following from the IPCC AR5 report (my bold italics):


You may have noticed Fred's references above were to work done in 1978, 1987 and 1988.  Fred did manage to move into the 21st century further on in his article, bypassing all the other temperature reconstructions and singling out  two authors whose work he seems to have approved from a science denying perspective.  After maligning Michael Mann and misrepresenting his early work while ignoring his later work, Fred wrote:


In actuality, we now have adequate proxy data from other sources, most particularly from Fredrick (sic) Ljungqvist and David Anderson. Their separate publications agree that there has been little if any temperature rise since about 1940! However, there was a real temperature increase between 1920 and 1940, which can be seen also in all the various proxy as well as thermometer data.

Our results show, in a comparative manner, the degree to which the various proxy types can be used to assess regional temperature variability on centennial time-scales. We conclude that during the 9th to 11th centuries there was widespread NH warmth comparable in both geographic extent and level to that of the 20th century mean. Our study also reveals that the 17th century was dominated by widespread and coherently cold anomalies representing the culmination of the LIA. Understandably, the centennial resolution of this study precludes direct comparison of past warmth to that of the last few decades. However, our results show the rate of warming from the 19th to the 20th century is clearly the largest between any two consecutive centuries in the past 1200 yr.


And does Fredrik Ljungqvist dispute the global surface temperature record in the instrumental era as Fred claimed?  I'd say not.  Here's another section of that same paper:


What about David Anderson? I couldn't find any global temperature reconstructions (or hemispherical ones either) by any David Anderson - but I probably missed it.  Anyway, if it's this David Anderson he's talking about, then Fred's barking up the wrong tree.  This from a 2002 paper:


Climate reconstructions reveal unprecedented warming in the past century; however, little is known about trends in aspects such as the monsoon.

Incidentally, the work of Fredrik Ljungqvist is cited several times in the AR5 report.


Below is a reference to a Ljungqvist paper plus just a sample of all the published work of Michael Mann and his various co-authors, to give you some idea of just how selective is Fred Singer.  Notice his paper on the Little Ice Age and the Medieval Warm Anomaly.  I'd say he knows a lot more about this than does professional denier Fred Singer.

Notice too all the different authors and how Fred Singer singles out Michael Mann?  That's the Serengeti Strategy in action.

(Copies of Michael Mann's papers are usually available at his website.)

It's mostly a lot of people raging at Michael Mann, not suitable for HotWhopper. The Serengeti Strategy works for WUWT dismissives but it no longer works with the general public, from what I can see.  There are a couple of choice comments that I can print though.

January 21, 2014 at 3:25 pm
Just looking at Mann’s reconstruction – it doesn’t look natural. The Earth has been cooling for 1,000 years and suddenly warms out of control? It can’t be real. If he had left in the LIA and MWP maybe I would have believed him.

Perennially Puzzled Bob Tisdale must have a soft spot for Fred, because he accepts Fred's lies - though he couldn't swallow some of Don Easterbrook's lies yesterday. He says:

New comments are not allowed.