How Anthony Watts gets a bit confused about ocean heat content


Willis Eschenbach has posted an article on Anthony Watts' WUWT blog.  He's wondering this time about ocean heat and forcing.  He's done something similar to what Bob Tisdale did a little while ago and wrote about here.

Here is Willis' chart.  Willis has done some sums on ocean temperature and plotted this chart in units of watts/sq metre.  Willis calculated from scratch and may not have got the conversion ratios quite right.  I didn't check.  I do know that it's not that easy to work out the specific heat of sea water going all the way down to two kilometres deep into the ocean. 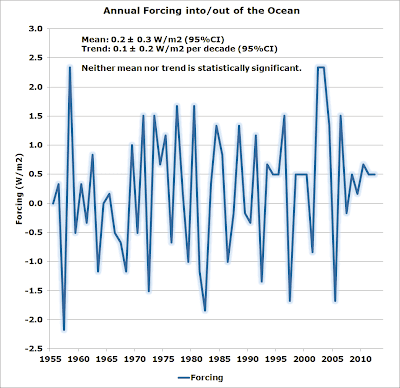 This next chart is also from Willis' spreadsheet.  He doesn't plot it or show it in his article, but it shows up in his calculations.  This time it's what he calculated as the heat accumulated in the ocean.  He did this calculation before working out the year to year differences and converting to Watts/sq metre.  In other words, it's part of the very same data he used to generate the chart above.  This one shows the cumulative effect on the ocean of the year to year changes shown in the top chart. 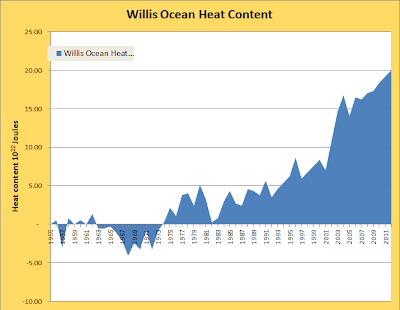 This next chart is based on a chart from SkepticalScience.  What I did was take the Skeptical Science ocean heat content and added in the heat content from the latest few years from NODC/NOAA (with an estimate from ocean temperature to fill the missing year 2004) and worked out the difference in heat being added to the ocean each year.  This is the same as Willis chart shown above but using data from a different and more trusted source.  It looks like more accumulated heat than Willis' chart in part because the base is different and in part because of Willis' different calculation, but both show a large accumulation. 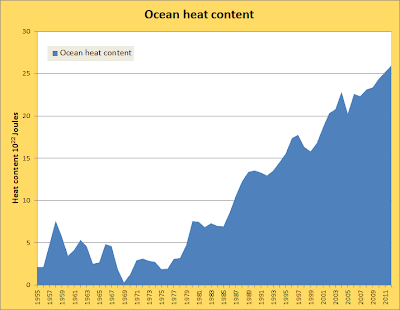 Lots of people fall for Willis' line and go on about how the ocean isn't really heating up etc.  What is a surprise (but probably shouldn't be) is a comment from Anthony Watts.

How Anthony Watts is tricked...

In the comments to Willis' article, Anthony Watts put up the SkS version of the above chart (which looks pretty much the same except it includes land and atmosphere as well), writing (my bold):

Hmmm, this rather puts the kibosh on this graph from the SkS zealots:
Makes me wonder how Murphy finds such a large trend in OHC, but Levitus does not find any trend in forcing.

[REPLY: Thanks, Anthony. There is a large trend in OHC, as you show in your graph, but it is not statistically significant. This is because of the high autocorrelation of the data (lag-1 autocorrelation of 0.92). As usual, SkS forgot to mention that ... w.].

I'm not about to check that out but will just observe that the standard errors quoted by NOAA are much lower than the heat content reported.  SkepticalScience has links to relevant papers, but they are behind a paywall.  It's certain that the ocean is heating up (sea levels are rising etc) just as it's certain the oceans are getting more acidic.

Small mercies.  I suppose Willis could have denied it was warming altogether or put it down to one of Bob Tisdale's magical ENSO leaps.

Thanks to Dana, here is the up-to-date SkepticalScience.com chart showing how heat is accumulating on Earth:


Read the comments below for some good insights and further information, including other references to scientific publications and data.
Posted by Sou at 5:04 AM