The origin of the 'reds under the bed' denier meme as it's applied to climate science is unclear. The meme is not restricted to climate science but can be adapted for any topic, such as open source software and even education and art, in fact anything at all to which one objects.  It can also be substituted for or by a "new world order" / "one world government" plot or a "fascist" plot.

Parody or the 'real thing'?

It can be hard for the casual reader to know whether someone is writing a parody or the real thing (see Poe's Law).  Take our Ben for example.  Ben often posts on climate science threads although I don't recall him ever discussing science.  In a few paragraphs on the HotCopper science and medicine S&M forum he mixes well-worn paranoid conspiracy theories (AGW cult) with 'reds under the bed' buzz phrases from the McCarthy era.  If he is writing parody he's kept it up for years without blinking.

Here is a handy list of key words (including frequency) for anyone who wants to emulate him:

In this screenshot I've highlighted some of the 'important' words and phrases.  As you can see, the words can be used interchangeably and work equally well in any or no context :) 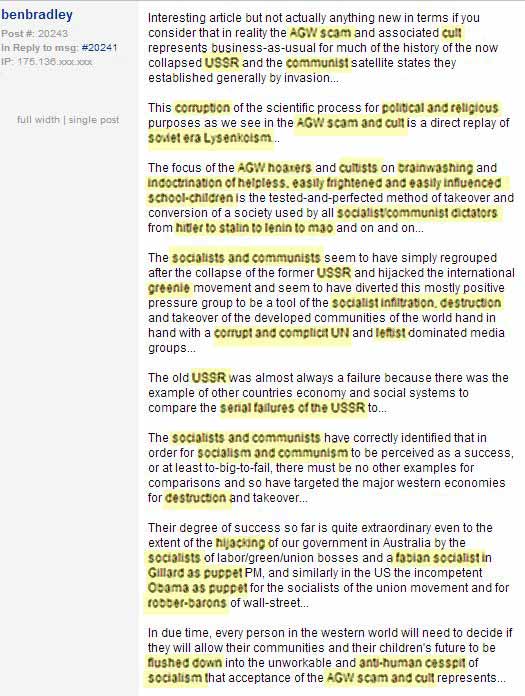