Trending troposphere temperatures to May 2017 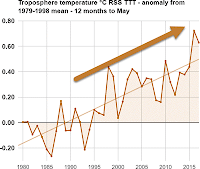 The troposphere temperatures for May 2017 are out. This report covers the lower troposphere as recorded in UAH v6 and RSS TTT for the troposphere (without the "lower"). It follows pretty much the same format as previous monthly updates.

For RSS TTT (troposphere), the 12 months to May 2017 is the second the hottest 12 months in the record (comparing similar June-May periods). Now that last year's intense El Nino has dissipated, May itself was the just the fourth hottest May, with May 2016 the hottest.

The lower troposphere (UAH v6) also showed the 12 months to May as the second hottest on record. However, in the UAH record, May was the third hottest May on record, after May 1998 and May 2016.


First here is RSS TTT with the latest dataset, version 4. TTT seems to measure more of the troposphere than TLT (that is, it has a greater vertical profile) with less of the stratosphere than the mid-troposphere data (TMT). It shows a higher rate of warming than RSS v3.3 and higher than UAH. Hover the cursor (arrow) over the plots to see the data points, trend etc.

This combination reduces the influence of the lower stratosphere, which is cooling at most locations. TLT gives most weight to the temperatures closer to the surface. TTT gives more weight to the troposphere and less to the stratosphere than TMT does, but not as much to the lowest levels of the troposphere as TLT does. However TTT has version 4, while TLT is still only provided as version 3.3. For a fuller explanation see the RSS website or the July 16 report here.

Figure 2 | Troposphere temperature for the month of May only (TTT). Anomaly is from the 1979-1998 mean. Data source: RSS


The rest of the charts are from UAH v6. This is almost identical to the old version of RSS, which is v3.3, so I don't regard it as being as good as RSS TTT v4.


Figure 4 | Lower troposphere temperature for the month of May only. Anomaly is from the 1981-2010 mean. Data source: UAH