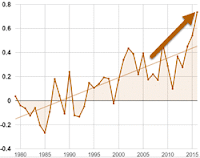 Despite what David Rose, the Global Warming Policy Foundation, the fake press (Breitbart), WUWT, and the US House Science Committee will try to claim - global warming is real and happening now. There is no ice age about to arrive.

For the troposphere, November was the hottest November on record!

The troposphere temperatures for November 2016 have been released. The lower troposphere is recorded in UAH v6 beta 5 and RSS TLT v3.3. This report also covers RSS TTT for the troposphere (without the "lower") and follows pretty much the same format as previous monthly updates.

For RSS TTT (troposphere), last month was the hottest November on record. For 2016 to be colder than the previous hottest year (1998), the troposphere would have to average a negative anomaly:- less than -1.57 °C for the remaining month. It's an understatement to say that is unlikely.


First here is RSS TTT with the latest dataset, version 4. TTT seems to be measure more of the troposphere than TLT (that is, it has a greater vertical profile) with less of the stratosphere than the mid-troposphere data (TMT). It shows a higher rate of warming than RSS v3.3 and higher than UAH. Hover the cursor (arrow) over the plots to see the data points, trend etc.

This combination reduces the influence of the lower stratosphere, which is cooling at most locations. TLT gives most weight to the temperatures closer to the surface. TTT gives more weight to the troposhere and less to the stratosphere than TMT does, but not as much to the lowest levels of the troposphere as TLT does. However TTT has version 4, while TLT is still only provided as version 3.3. For a fuller explanation see the RSS website or the July 16 report here.

Figure 2 | Troposphere temperature for the month of November only (TTT). Anomaly is from the 1979-1998 mean. Data source: RSS


The rest of the charts are from UAH beta v6.5. This is almost identical to the old version of RSS, which is v3.3, so is likely to be updated at some time. (Other RSS data sets, like TTT are now at version 4.)

Figure 3 | Lower troposphere temperature for 12 months to November. Anomaly is from the 1981-2010 mean. Data source: UAH


Figure 4 | Lower troposphere temperature for the month of November only. Anomaly is from the 1981-2010 mean. Data source: UAH


Below is a chart comparing the strongest El Niño years since 1979, which were followed by a La Niña, just for UAH v6 beta 5. I've included the 2015/16 period for comparison.


La Nina is not very likely to appear this year according to BoM, although NOAA says it's here already. One thing you'll notice is that September and October in the UAH data are similar to 1998. However the temperature has jumped up again this November, whereas in 1998 it dropped further. I think the UAH data record as a whole would be quite different if satellite drift were better accounted for by UAH - going by comparison with RSS data.

As the world gets weirder and hotter, climate science deniers look as if they are also getting weirder, and bolder. It's the "Trump Effect" leading to what I regard as "Trumped Up Courage". Disinformers are pretending that global warming will stop because a fake sceptic has been elected as President of the USA.

The latest is the fiasco caused by disinformer David Rose, who was quite upset that scientists called him out for his recent misleading article. David was trying to make people believe that global warming had nothing to do with the record high temperatures. He was claiming that it was all El Nino. As Scott K Johnstone reports at Ars Technica, David's article was picked up by the "hate site" Breitbart and then tweeted by the US House anti-science Committee.

To bolster his claim, David Rose had to bypass every single temperature record except one - the land coverage only record from the almost defunct RSS troposphere, v3.3.

He and his echoes got in just in time. If they'd waited a couple of days, they'd have found that the above land only RSS v3.3 anomaly went up again in November. (It dropped to 0.12 C in October and jumped up to 0.35 C in November.)

In other words, disinformers had to disregard all the global observations and focus in on temperatures of the air above the land, in order to con the public. Indeed, what they relied on:


Anthony Watts, in partnership with Eric Worrall (who has taken over at WUWT), are busy dishing out disinformation and conspiracy theories same as ever. This article is too long to go into a lot of detail, so I'll just pick out one outright lie that Eric Worrall wrote. He was writing a lot of nonsense about the Breitbart nonsense, and falsely claimed:


Why are climate advocates so upset? The reason is they were expecting global temperatures to keep shooting up.

He's wrong - though I doubt he cares much. Having got the top spot at WUWT Eric won't want to let it go by being factual. Top  scientists have been pointing out for months now that 2017 is not expected to be as hot as 2016. That's partly because El Nino added an extra shove to the greenhouse warming, and partly because there (still) could be a La Nina next year. (NOAA has issued a La Nina advisory, however Australia's Bureau of Meteorology doesn't agree, and is still on La Nina watch.)


Anthony Watts still hasn't posted Roy Spencer's UAH update article yet, which came out yesterday. Not that it would matter much that it contradicts many of WUWT's recent articles. (The wilfully ignorant climate deniers at WUWT are more than capable of holding several contradictory positions at the same time.)

As an aside, Roy Spencer is trying to downplay the hottest year on record, writing:


It should be pointed out that 2016 will end up being 0.03-0.04 deg. C warmer than 1998, which is probably not a statistically significant difference given the uncertainties in the satellite dataset adjustments.

Well that may be so although I think he's slightly underestimating the difference. Satellite temperatures are tricky and the uncertainties would be greater than for surface temperatures. UAH in particular has big problems.

The comments below are from Eric Worrall's unjustified defense of the factually wrong article on the white male supremacist, misogynistic, racist website, Breitbart. (I've read that some people prefer this longer description over "alt-right" - which means the same thing.)


December 2, 2016 at 10:00 am
So how long will it take, given the current weak La Nina conditions, for them to state that it is the La Nina that is causing the cooling and not a hiatus?
How long?
We’ll see.
If the La Nina is used as a causal explanation for global cooling than El Nino must be allowed as a cause of Global Warming


Sanata Baby's comment is indicative of the brainpower typically seen at WUWT:


December 2, 2016 at 6:01 am
The leftist belive they have politicized climate science in order to promote their agendaes?


And if you think the previous comment was an aberration, you'd be wrong. This is from Jimmy Haigh:


December 2, 2016 at 1:00 am
Global warmongering climate bollicks fondlers like Sanders haven”t a scooby.


There was also quite a bit of discussion about "fake news" in the WUWT comments, with lots of people letting everyone know that they prefer fake news to real (by parroting it).


Back to normal soon


Some of you might have noticed that I've not been publishing as often these last few weeks. I want to assure you that HotWhopper is alive and well, despite articles being a bit sparse. It's just that I've been super/extra/wildly busy with other things lately - traveling lots and trying to keep up. Things should settle down after the next couple of weeks.

It's probably not a bad thing. Emotions are running hot in cyberspace after Donald Trump was announced as President Elect. On the other hand, I keep seeing articles that are right up the HotWhopper alley - and so I apologise for not having the time to respond.

With the way things are heading all around the world (in politics and climate), there'll be no shortage of material to write about in 2017.