Today, finally, Anthony Watts has written about the record low Arctic ice extent that is being observed in the Arctic (and Antarctic) (archived here). He copied and pasted a press release from the National Snow and Ice Data Center (with no link to the original, as usual). What I'm writing about is the weirdly ignorant comment he added at the top. Anthony wrote:


It’s weather folks, but do remember this moment the next time we get a record high Arctic sea ice extent, the same people that are caterwauling on Twitter right now about this will tell you that it doesn’t matter.


Oh my! Anthony won't see a record high in his lifetime. It's highly likely that no-one will -  for thousands of years at least. Even just going back over the satellite record, since October 1978, there hasn't been a high record in the average annual sea ice extent since 1982. (Data is here - and the spreadsheet is here) If you analyse the monthly records, most months have the record high recorded in the first year of observations - 1978 or 1979 - almost forty years ago. The exceptions are the months of: May (1985), July (1983), August (1983), and September (1980).

In other words, the most recent record high sea ice extent in the Arctic was in May 1985, more than 30 years ago! And that's just the satellite record. If you go back to 1953, except for January when the record high was in 1979, the latest monthly record highs were in 1971 or earlier - 45 years ago.

Anthony added what I take to be his argument to stop monitoring what's happening, on the basis that what he doesn't know he doesn't have to worry about. He wrote:


Also note that before we had real-time satellite data to fret over and the Internet, the world would go on without a care.

Here is what's happening in the Arctic, from the National Institute of Polar Research: 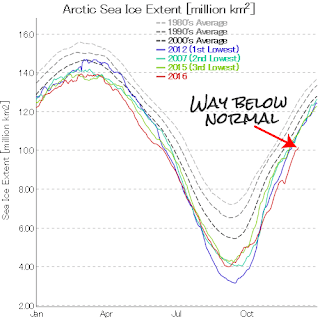 Here's a chart of global sea ice extent, from Wipneus, and an article by Nerilie Abram at The Conversation:


Note that the Arctic and Antarctic sea ice extents are subject to very different conditions, and so they should properly be considered quite separately. (Both regions are affected by global warming, but can respond quite differently.)

No time for more - just thought you might like this latest example of Dunning-Krugerism from Anthony Watts at WUWT.