Flashback to 1883: Burning coal is polluting the atmosphere 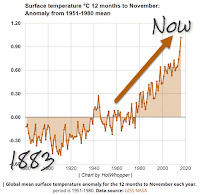 The letter below gets some things right and quite a bit wrong. What it does show is that 133 years ago, back in 1883, the general public was reading about how burning coal is polluting the atmosphere. Other newspaper flashbacks can be seen here, including my favourite, from 1884. Weirdly, there are still a few very vocal people who think gravity is a hoax or should I say the equivalent - that climate science is a hoax.

(The paragraph breaks and emphasis are mine.)

Pollution of the Atmosphere

There was a letter in Nature some time since, calling attention to the pollution of the atmosphere by the burning of coal; and it was calculated that in the year 1900, all animal life would cease, from the amount of carbonic dioxide; but, the author had overlooked the fact that the rain is continually cleansing the atmosphere of this, and the fall of this rain on the ground, and the combination of this with various salts ; besides the oceans alone would absorb their own bulk at normal pressure, but at an increased pressure of, say half a mile deep, would dissolve more than we are likely to need for hundreds of years.

But there are other products of combustion, or rather of incomplete combustion, that are not brought down in this manner by rain, as hydrogen and the hydrocarbons, chiefly marsh gas and ethylene. The latter has, I believe, been observed by the spectroscope on the Alps, and was supposed to have come from space.

Since the year 1853 (as near as I can estimate) there has been burnt 10,000,000 tons of coal; and if we say (in its consumption by household grates, leakage by gas pipes, &c.,) 1-100th escapes, then 100 million tons of hydrogen and hydrocarbons are floating in the atmosphere, or 1-10,000,000th part in bulk; if we say the average proportion of hydrogen to be .45, and of marsh-gas .35, and of ethylene .4, we have .84 per cent of gases that are lighter than air, and it is more than probable that the law of diffusion of gases, as demonstrated with jars, does not apply to the atmosphere. The cases are not parallel: in the air we have unconfined space, pressure and temperature diminishing infinitely, conditions favourable to the lighter and the gas with the greater amount of specific heat rising and maintaining its elevation, especially as we know that in large halls carbonic dioxide is found in large quantities on the floor.

According to Professor Tyndall's researches, hydrogen, marsh-gas, and ethylene have the property in a very high degree of absorbing and radiating heat and so much so that a very small proportion, of only say one thousandth part, had very great effect.

Letter to the Editor in Nature.