SciAm article gets climate science deniers to shout denial about their denial... 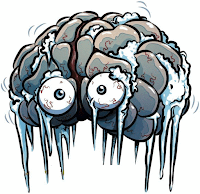 Over at WUWT Eric Worrall has posted his take on an article in Scientific American (archived here). The article is by Margaret Hetherman, and she's written about climate change. Her article is about how we are reacting and coping with it, wondering how future generations will regard us, and speculates about why deniers think climate change is a hoax.

Eric wrote above a slab of copy and paste:


Scientific American thinks we are all so worried about climate change, our minds have snapped – that we’ve all turned to “climate denial” as a coping mechanism.

I read the article and there was no talk of snapping minds, or melting brains.

He highlighted this quote from "psychiatrist and climate activist" Lise Van Susteren, M.D.


“Denial is something that allows us sometimes to get through the day,” says Dr. Van Susteren. “And in some cases that’s really good, that’s adaptive, but in other cases it’s going to kill you . . . and this one’s going to kill you.”

The article was structured as five stages of grief as described by Dr. Elisabeth Kübler-Ross. However the writer reports that Dr Van Susteran doesn't think that's what's happening.  In the "grief" section, Ms Hetherman wrote:


But the future grief on our planet will not be like that of a natural disaster, according to Dr. Van Susteren, when there is a low point and then the worst is over— when people grieve, work together and then pick up.


Few credible skeptics ever claimed humans have absolutely no influence on climate, but there is a huge gulf between predicting a mild, almost undetectable climatic nudge, and predicting an immininent planetary emergency.

After which he gabbled on about how he thinks the exceptional climate models have "failed" - um no they haven't. He seems to be using the silly denier argument that because all the ice hasn't melted yet, it never will. He thinks that unless the rise in temperature accelerates that means climate change isn't happening. The incessant rise in surface temperature isn't enough for him. It's called shifting the goal posts.

Finally, his personal incredulity (another logical fallacy) emerges, when he writes:


Claims that previously unanticipated “inertia” is preventing the manifestation of all these apocalyptic events, in my opinion is a frantic last ditch effort to defend broken theories from falsification.


It's quite remarkable that a day after it was announced that we've just had the hottest month ever recorded, making it ten consecutive "hottest ever" months (for the respective months), after two in a row hottest ever years on record, and four consecutive hottest decades on record - that people like Eric Worrall and the crowd at WUWT are still in denial. Perhaps it's all that gets him through his day.

Margaret Hetherman wrote that James Hansen thinks that science denial is on the wane. It looks as if she agrees, writing:


While many in the denial camp have now set their tents up elsewhere, stragglers remain, buttressed by a heavily financed machine that has deliberately cultivated and preserved that pesky first stage of mourning.


I've been asked to write about our newly famous climate conspiracy theorist, Malcolm Roberts. Yes, there's an article in the works about that and more. Coming soon.


As I said, the reaction by the stragglers of hard core deniers at WUWT was a jerk of the knee, which is an appropriate reaction from a bunch of jerks. They all doubled down on their denial as if they want everyone to know that they haven't progressed beyond denial, though there is a fair bit of anger on display. Here's a sample:

Greg isn't just in science denial, his confirmation bias shows through. The article didn't say anything about deniers being mentally ill.

August 17, 2016 at 1:20 am (excerpt)
Yeah, right. never mind that facts, just stick with the insults. Now it is not a scientific debate it just that anyone who can’t see the “truth” is mentally ill.
Perhaps in a follow up paper Dr. Van Susteren could tell us all about projection. Attaching the your own faults which you are blind to on others.
Those who have been shouting “deenyerz!” for years are the ones in psychological denial. They can not come to terms with the unacceptable reality that the climate is not falling apart as they had ( bizarrely ) hoped it would.

August 17, 2016 at 4:45 am
The Armageddonist Environmentalists. They pray for Doomsday to wash away the evil that is mankind! Their anti-humanism is so blatant.


Bob Cherba (@rbcherba) is another one who thinks that the article said deniers were mentally ill. It didn't. And he thinks some imaginary person wants to send him to jail. His comprehension skills are non-existent.


August 17, 2016 at 6:45 am
Now that skeptics are being labeled as mentally ill, Sen. Whitehouse and his friends can begin shipping us off to mental institutions like they did (do?) in the USSR (Russia). They’re already pushing to put us in jail.


August 17, 2016 at 6:38 am
Wait till the cyclical cold starts sitting in, then we will see real denial from the grant abusers and other climate hoaxers.


spangled drongo is in complete denial, not just a little bit of a denier:


August 16, 2016 at 9:52 pm
With NO sea level rise [not just no acceleration] in geodetically stable areas and measured warming at the rate of half natural variability, ACO2 could be cooling us.
But either way I refuse to insure the house at a premium that is twice its value.
Per year.


benofhouston replies, showing that he's only a "little bit" denialist. (Sea level has been rising at 3.4 mm a year since 1993.)


August 16, 2016 at 10:16 pm
Nah, it’s pretty constant at ~2 mm/yr. We are still recovering from the last ice age, remember. Don’t make claims that are easily disproven by anyone with an internet connection.


August 16, 2016 at 10:25 pm
Talking to myself here but PS, How is it even remotely possible that a writer for Scientific American doesn’t know how a greenhouse works ??
The abject stupidity of these people is mindboggling.


Paul Westhaver's denialist reaction is to accuse the author of being psychotic.


August 16, 2016 at 10:15 pm
Psychological projection: from wiki…
is a theory in psychology in which humans defend themselves against their own unconscious impulses or qualities (both positive and negative) by denying their existence in themselves while attributing them to others. For example, a person who is habitually rude may constantly accuse other people of being rude. It incorporates blame shifting.
I think the psychosis lies within the author at Scientific American.


Dave N thinks he has the answer. Pity he doesn't go further and explain why he thinks deniers are still in denial. Could he think that they are just insane?


Are We Feeling Collective Grief Over Climate Change? - article by Margaret Hetherman in Scientific American, August 2016