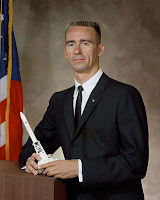 Strange what possesses a man after he retires and looks to retain purpose in life, any purpose, any friends. Even fake friends who'll foster his paranoia and shamelessly exploit it. This was plastered at WUWT the other day as part of the latest Heartland Institute's "climate hoax" conspiracy theory.


“The president obviously does not know that he is participating in one of the greatest scientific hoaxes in history.”


There was more silliness, but that quote was the most blatant declaration that the Heartland Institute and former astronaut Walter Cunningham are pushing crackpot conspiracy theories.


From the WUWT conspiracy chamber


The thoughts at WUWT were also conspiratorial. Mark was only half joking when he wrote:


Tom Halla picked up on the "reds under the bed" theme and added:


April 22, 2016 at 7:19 am
Naa–most of the greens I know were former Reds, emphasizing former. Try reading Eric Hoffer on mass movements and their interchangability.Fanatics tend to change topics, not stop being fanatics.


April 22, 2016 at 7:58 am
“Fanatics tend to change topics, not stop being fanatics”
Well put. Plus when the “revolution” comes to an end the “revolutionaries” become the enemy, of course because Environmentalism is a means to an end, once you get to the “end” the means are no longer needed, ie Environmentalists who will cry aloud when slapped with “breeder” laws and told they cant go and enjoy nature because humans are banned, only them will they see their folly :D
This is all headed towards 2 classes of humans, the serf colonies and the ruling whatever they call themselves these days, a nice manageable 500 million globally, with most of the world off limits except for the dystopian rulers.
If you doubt this, listen to Ted Turner lament us numerous humans, and then consider how much land Ted Turner owns with no humans on it, then consider his input into this matter behind the scenes along with the Rockefeller foundation and all those green groups Prince Philip (Mr “i want to come back as a virus and kill most of humanity”) is patron of.
The lefties are a tool, a tool of the few mega wealthy who consider most other humans as little more than uncivilised animals.
Once the “revolution” ends, the lefties will be chucked into the same basket as the rest of us and that you can bet on

Mark tried to rationalise or justify his paranoia:


April 22, 2016 at 8:00 am
This may sound a bit conspiratorial, but not if you go through the history of how the most wealthy and powerful has regarded the masses of humanity, it is consistent throughout.


There are some real weirdos at WUWT, aren't there. Take p.g.sharrow:


Utter nutters. Mark can't get enough thoughts out. His mind is full of the sludge:


April 22, 2016 at 8:15 amThe irony is democrats cant see that Obama has exceeded his powers and broke the law more than Bush did
Obama basically turned his Oval Office chair into a throne

The further you read the more you wonder if these people live in society or if they are all locked up safe somewhere they can't do themselves any real harm. Bob Weber


April 22, 2016 at 7:33 am
This is a big mistake. Barack Obama’s legacy will not be what he is attempting to manipulate it to be.
Nature will not cooperate with warmist ideology. This CAGW fad is built on incorrect premises, and once it’s glaringly apparent how wrong it is, Barack Obama’s personal legacy will be in tatters as the world turns on him because of his ignorance and machiavellian manipulations.
Barack Obama’s legacy will be one as the biggest lying manipulator ever caught red-handed by nature herself in the biggest con ever foisted on humanity. Nature herself will convict Barack Obama.
Everything Barack Obama is doing by the green transfusion he’s sticking us with is meant to turn the United States into a earth-worshipping economically anemic country, whose citizens are literally disempowered.
Today’s signing agreement is the beginning of the end of CAGW, and Barack’s too blind to understand that.
EVERYONE needs to stand firm against him. All he’s got is a big f’ing mouth. How long are we going to let this big mouthed bully push US around?


n.n gets caught up in the excitement and adds this highbrow thought:


April 22, 2016 at 9:12 pm
Look at it this way: On January 20, 2017 either Obama will be a bad memory or the US will be in a civil war and won’t be negotiating any trade deals with anyone. Now I can’t guarantee that his replacement will be worth anything either since my countrymen seem to have collectively taken leave of their senses.

Curses! It's a conspiracy! The Fury is Back Thrice Over - HotWhopper, July 2015