Below are charts comparing El Nino years with this current El Nino for RSS and UAH lower troposphere. The lower troposphere might or might not have peaked in February. In 1998 the peak was in April.


Roy Spencer sometimes has a (pot)shot at predicting what will happen over coming months. In the February report of January temperatures he wrote that January might have been the peak, or not:


We are now approaching peak warmth in the tropics due to El Nino conditions. Only time will tell if warming continues for a few more months, or whether January was the peak.


In the March report of February temperatures he didn't make a prediction and wrote:


The February warmth is likely being dominated by the warm El Nino conditions, which tends to have peak warmth in the troposphere close to February…but it appears that isn’t the whole story, since the tropical anomaly for February 2016 (+0.99 C) is still about 0.3 C below the February 1998 value during the super-El Nino of that year. In addition to the expected tropical warmth, scattered regional warmth outside the tropics led to a record warm value for extratropical Northern Hemispheric land areas, with a whopping +1.46 C anomaly in February…fully 0.5 deg. C above any previous monthly anomaly (!)


In this latest (April) report of March temperatures he predicted that the peak has passed and wrote:


I suspect that February and March represent peak El Nino warmth in the lower troposphere, and the rest of the year will see cooling.


I don't care much for Roy's predictions. Given his prediction for January, I can't see that they are based on the past or any particular understanding of ENSO events and the lower troposphere response.


12 months ending in March each year


In the comments, Olaf R suggested posting the TTT data from RSS which is now at version 4. TTT seems to be more of the troposphere than TLT (that is, it has a greater vertical profile) with less of the stratosphere than the mid-troposphere data (TMT). I've used it to try out Google charts, which are more interactive than the charts I've been using so far. Hover the cursor (arrow) over the plots to see the data points, trend etc.


This is a selection of comments from the WUWT copy and paste of Roy Spencer's latest article about the UAH lower troposphere record. There was much speculation about the reappearance of a "pause".

ralfellis was the first hopeful:


April 4, 2016 at 11:49 am
The question is – when will the pause reappear? With the inevitable cooling after the el Nino, I would expect the regressively calculated pause to be back by the end of the year.
R


April 4, 2016 at 12:57 pm
Well only third warmest; we’re already in a cooling trend !
I don’t think the Monckton Pause ever ends; but I guess it can go to zero months or maybe one month.
Has Christopher given us a recent run of his algorithm; or did it just all fade away except for the grin ??
G 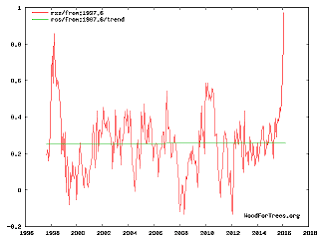 The regression line currently is about 0.26°C in 2016 and near flat. Every new month above that increases the trend, which became positive in Feb. The trend increase is proportional to the new residual (excess over 0.26). It won’t start decreasing until temperatures go below 0.26. And then, for the trend to go negative, the cumulative sum of deficits (below 0.26) since Feb 2016 would have to exceed the sum of excesses which is currently building fast. Not this year, maybe never (and not within the life of RSSv3.3).


emsnews is not only banking on a La Nina, he or she thinks it will be very cold. (The Australian Bureau of Meteorology isn't so sure.):


Some are being cheerful about the spike in lower troposphere temperatures. Latitude wrote:


Patick B is complaining about the lack of error margins. I don't know if he makes the same complaint with every other article at WUWT:


April 4, 2016 at 12:03 pm
One more time – how can you possibly announce such “results” without including properly calculated margins of error. Then once you have margins of error, how does the ranking look? Lots of tied months?
No science without margins of error. You can’t understand anything if you don’t know what you measured.


Greg picks up on Roy Spencer's sloppy wording about the "third warmest":


Slipstick is amused by the inconsistency of deniers at WUWT:


April 4, 2016 at 1:07 pm
I find all the “this means nothing” naysaying amusing, especially when it is from the same people who use the very same dataset as evidence of a “pause” (which did not, by the way, occur in the oceans, hence the large atmospheric temperature spike from the El Nino).

David S is deluded. Where do people like him get their crazy notions from?

April 4, 2016 at 2:56 pm
I know that highlighting that this is the third warmest month since the start of satellite data may be of interest but it adds nothing to the climate debate. Unless one extends the analysis to the 19th century and assesses the pre industrial CO2 days and post CO2 days the comment is in fact largely irrelevant to the debate and in fact misleading in the hands of Warmists. Wasn’t the temperatures experienced in the 1930s and 1890s higher than those experienced today? So what benefit to the overall debate ( discussion) is the fact that the last 2 months have been 2 of the warmest in a limited time set?

When asked for evidence, deniers fall back on "lots of" while providing no data or evidence, and weave a conspiracy theory. Gloateus Maximus wrote:

April 4, 2016 at 4:46 pm
Lots of data show higher temperatures in the 1930s than now, but the books have been cooked beyond recognition.


Gloateus Maximus does dig up what he calls "evidence", but it's not. It's only some data for maximum temperatures set in some states in the USA. Nothing to do with global temperatures or long term trends. You'll also notice the inconsistency. Are the books cooked or aren't they?


April 4, 2016 at 4:51 pm
For instance, check out maximum state temperature records from the 19th century through the 1930s:
http://www.ncdc.noaa.gov/extremes/scec/records


TA lives in an alternate unreality. He or she referred WUWT readers to Steve Goddard's denier blog. Good grief! How desperate are deniers these days? He or she also confused US temperatures with global temperatures when writing about what James Hansen said. Is it any wonder TA didn't provide the link, which would not have supported his claim? When you have to accuse scientists all around the world of fudging every single temperature data set, then you've lurched into Lizard Men territory.

The data you refer to must be the adulterated NASA-NOAA temperature data. You are correct that the NASA-NOAA data show the 1930’s as much cooler than today, but we all know that is a BIG LIE! Or most of us, anyway.
seacice1 wrote: “Do you have a data set that says otherwise?”
Here you go: http://realclimatescience.com/

This temperture data modification was done in order to make it look like the Earth’s atmosphere was getting hotter and hotter with each passing year, to assist them in perpetrating the fraud that humans are causing the climate to behave abnormally because humans burn fossil fuels.
This, plus NASA’s prestige has pretty much convinced the gullible in the world, that the climate charlatans are right. Unfortunately for them, the thermometer is not cooperating with them, at least not much. They may be able to falsify some history, but they can’t falsify the data going forward, so the time of fudging the figures is over.
These rewriters of the surface temperature record have done great harm to humanity. They better hope the temperatures rise in the future.