Every month since March, I've posted a chart of the progressive year-to-date global average surface temperature, from GISS. This is the update with October included. I'll repeat the explanation with each update and add what seem to be things to watch.

Worth noting: Hottest November on Record by 0.25 °C

If you look at December, each year shows the annual average temperature for the full year. For November, each year has the average for the year up to November, not including December. (As before, I've made it extra large because of all the fine detail.)

Some charts showing how temperatures evolved in previous El Niño years can be seen in this article: Why Christopher Monckton is getting nervous about global temperature.
[Update] Here's an update to the GISTemp chart for El Niño years from that article. (In past years, GISTemp peaked in February/March the second year of the El Niño.): 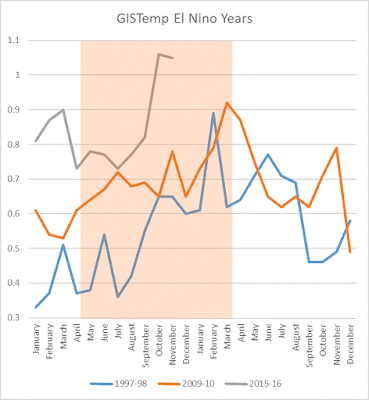 Here is the link to the table for the Year to Date chart.
Posted by Sou at 1:12 PM