Stretching credulity or the limits of knowledge at WUWT: An ice age cometh

There still isn't much happening in deniersville. The hottest year ever has flummoxed them, leaving them flailing ahead of Paris - so far. Anthony Watts is so stuck for contributions to pin on his blog noticeboard that he's scraping the bottom of the barrel with a very dumb "ice age cometh" article by petroleum geologist Dr. Norman Page (archived here). I wonder if this is the sort of thing that Anthony will publish in the first edition of his OAS journal?

Norman is a science-denying ice age comether from way back who by now should have learnt a few things. He hasn't. What he claims to have done is written an article for an eight year old child. From what he's written, an eight-year-old would run rings around Norman when it comes to climate science.

Norman starts off badly, when he can't even get the name of a well-known publisher of dictionaries right. I mean it's cute, but ...:


Then he wanders off into a very long-winded article, the nuts and bolts of which meander from basics about day and night and the seasons, then through pseudo-science cyclical quackery before degenerating into One World Guvmint conspiracy nuttery:


Here is what has happened with global surface temperature since 1880: 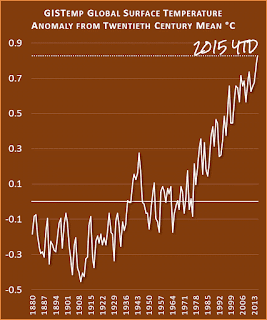 Here is how Norman Page sees it: 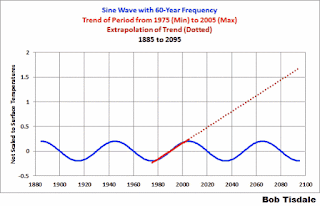 
August 31, 2015 at 10:54 am
I started losing interest at about the same point. Not because of sig.figs but that assertion that the very speculative “1000y cycle” exists and will reproduce itself again.
Pumping out this kind of non-scientific hypothesis as fact to a young and impressionable mind of the supposed 8 year old is despicable. This is just as bad as the indoctrination that is currently going on our schools. It is not any more acceptable simply because the message is a non AGW one.
Honestly, this article is junk science of the same kind that I would expect to see on SkS and the likes. WUWT is going down hill rapidly with a number of very poor science articles recently.
Very disappointing.


August 31, 2015 at 7:48 am
Norman, what a fantastic essay. I have been e regular on WUWT for several years and I did not know this quote existed
” lack of full scientific certainty should not be used as a reason for postponing such measures”
I have said this before but will say it again. The UN is acting very much like the EU in attempting to govern multiple countries, by stealth. Both the UN and EU are fixated with AGW scares as a means of control, it can be the only logical reason why safe nuclear power (by uranium or thorium) is not higher on the research agenda. They know AGW is not happening.
Once you control the energy supply of a country, you control that country.


Solar physicist lsvalgaard put up some charts and wrote (extract):


August 31, 2015 at 8:02 am
With reference to Bob’s sine wave graph, recall that at the trough of its 30-year down trend in the late 1970s, scientists were worried that the cooling trend would continue, leading to another Big Ice Age.
But instead the trend bottomed out and ticked up, leading to worries about the Venus Express. Now the wave is headed down again, but “scientists” are loathe to jump off the climate gravy train.


Anthony Watts knows he has to provide something to please every one of his deluded deniers. BallBounces is happy:


August 31, 2015 at 8:23 am
Thanks for this. If I had a top-ten list of climate change articles, this one would be in it.
The following bit seems more polemical than sober facts/evidence-based. The argument would be stronger if it stuck to observable facts, i.e., they shifted their concern to climate change, without imputing motive. It’s difficult to impute motive, unless you have access to internal documents. Here’s the bit:
Ten years later it was obvious that the predictions of imminent death and disaster were wrong. The people at UNEP still wanted to take global control of the worlds economy. They realized that if they could show that the CO2 ( carbon dioxide) produced by burning coal and oil to make electricity and drive our cars might cause a dangerous warming of the earth they would be able to scare the Governments and people into writing laws giving the UN ( and them) control over the world’s economy by controlling the type of energy used and its price.


August 31, 2015 at 9:30 am
Whether we quibble about 1000-yr solar cycles or not, the evidence of warm and cold cycles of this sort of length is abundantly clear.
What caused these cycles? We don’t know for certain, and probably never will.


August 31, 2015 at 10:27 am
I believe that evidence supports 1,000 year and (to a lessor extent) 60 year cycles in Northern Hemisphere temperature, but I do not believe that we have identified anything in solar activity that explains this. I cannot effectively explain the cycles, and, to my knowledge, neither can anyone else. But our ignorance in explaining them does not mean they do not exist.
Aside from tying the cycles to the sun, the rest of the article is spot on, and the more people know about how this whole myth of catastrophic global warming came about, the better. I am sharing a link to this article on Facebook.


From the HotWhopper archives