I don't know what's got into Anthony Watts. Yesterday he thought it was June instead of July, and wrote about an upcoming release of May data from NOAA, when that report had already been released a month ago.

Today Anthony seems to think that 2050 is behind us (archived here). That it's been and gone. That we're already past the middle of this century. He wrote about a "failed prediction" from Joe Romm of Climate Progress, quoting him as writing (my emphasis):


In 2007, Science (subs. req’d) published research that “predicted a permanent drought by 2050 throughout the Southwest” — levels of aridity comparable to the 1930s Dust Bowl would stretch from Kansas to California.  Last year, a comprehensive literature review, “Drought under global warming: a review,” by NCAR found that we risk multiple, devastating global droughts worse than the Dust Bowl even on moderate emissions path.  Another study found the U.S. southwest could see a 60-year drought this century.


So Anthony thinks it's 2050 already**. Is this a known condition? To lose all sense of time? This isn't a once off, it's happened to him before you know.  Maybe it's a permanent condition. One time he put up a list of what he called failed predictions that he said were "predicted by scientists and activists 25 years ago that would be a result of global warming". I went through his list at the time. He must have thought at the time that the year was 2039 or later, instead of 2014. Maybe he thought then that it was already 2050, because this is what I wrote about what I found:


Thing is, I only counted fifteen of his 107 predictions that were made 25 years or more ago.  All the rest were more recent.  And of those fifteen, only eight were about global warming.  In fact quite a few of them were about global cooling and some weren't about either warming or cooling but something completely different.  So not only does Anthony fail arithmetic but he can't even stick to the subject he himself chose.


While we're on the subject of predictions - care to guess how all the alarmist predictions from deniers are doing? You know, all their predictions about the ice age that's comething? I put together a collection of them a while back.

And back to his original subject, drought. I wonder if Anthony has heard that there has been a drought in California for quite some time? He doesn't mention it at WUWT, so maybe not.

** Anthony might have just been talking about the headline: "Dust Storm Marks Beginning of Southwest's "Permanent Drought"" - but the headline didn't reflect the article itself.

Most of the deniers seem to think there have been a lot of wrong predictions. Maybe like scientists predicting it will get hotter as time goes by: 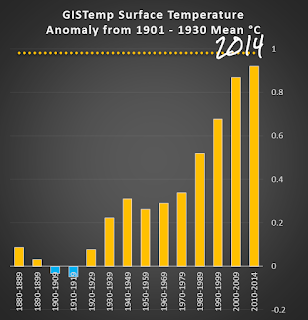 Joe Ford wants me to compile all the alarmist ice age predictions again. Maybe I will.


July 16, 2015 at 3:58 pm
This needs to compiled over time into a searchable database. In the future all predictions of doom must be put in the context of past predictions. Credibility matters.


I wonder if Jtom knows how long a decade is? Or if he can point to a prediction made decades ago that there'd have already been droughts lasting decades -:


July 16, 2015 at 7:10 pm
For completion, and to show the true depths of their lack of understanding the climate, the index list of predictions should indicate whether the prediction was/is true, or proven false.
There have been so many predictions, it should be of no great surprise that many have proven wrong. I think the real eye-opener is how few any have come close to being realized. There seems to be fewer correct predictions than random chance based on history would dictate. The climate has become remarkably unremarkable wrt consistent trends (e.g, long-term pattern change, like droughts lasting for decades) or number of extreme events.


Steve Reilly needs his memory checked. Or maybe it's just that there are lots of deniers who are temporally-challenged:


July 16, 2015 at 4:30 pm
Back in the 80s and 90s the goal posts were set at 2010. That was the “game over” year if we didn’t do something urgent to cut emissions. There would be temperature rises around the 2 or 3 degree mark, endless drought with massive crop failures causing food riots (even in places like the United States and Australia), extreme weather with increases in cyclones, massive sea levels rises generating 50 million climate refugees, plagues of tropical diseases invading the temperate zones and some children born in snowy areas who would never see snow in their lifetime. Well, we’ve had not one climate refugee, cyclones and hurricanes have actually decreased, crop yields have increased, we’ve seen record snow falls, sea levels rises have been to the order of a few millimetres a year as they’ve been centuries, and … well, need I go on? Now the goal posts have been shifted to 2030, 2050 and 2100, depending on what they happen to be raving on about at the time.


It must be a feature of denialism - none of them know what year it is. So far no-one has pointed out to Anthony that this year is 2015, not 2050 or beyond.

References and further reading from the HotWhopper Archives