Anti-science activist Anthony Watts can't make up his mind if he's coming or going. Into or out of an ice age, that is. And he wonders why people regard his blog as utter nutter heaven.

Today he's promoting David "funny sunny" Archibald again, with his ice age comething predictions (archived here). He found a spot somewhere in the world where it's been a bit cold lately, and wrote an article with the headline: "A Prediction Coming True?"

WUWT - a choice of warming or cooling

WUWT gives you lots of choices.  If there's one thing that differentiates deniers from normal people, it's their lack of consistency. (There are lots of other things, too. Such as their lack of precision, lack of error bars, lack of data and code, lack of reality - Oh, you could go on and on...)

Who to believe? WUWT or WUWT? You can choose between David Archibald at WUWT or Fred Singer at WUWT. Here is Fred's Little Ice Age bounce prediction - that the bounce might go on for one or two hundred years:

Or maybe you'll believe Fred Singer. So many choices at WUWT:

It was cold in Maine last winter

Apparently Maine has been a bit cool these past four months. David found someone somewhere that reported this fact. He put up a chart of temperature from a town in the next door state to show what he meant: 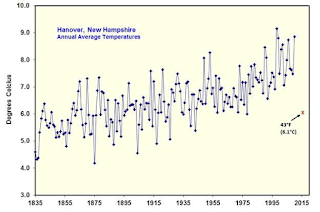 Yep, his chart shows just how much hotter it's been getting in Hanover, New Hampshire!

That's not what David was saying though. He added a data point that he said was from Maine. No-one complained that David added his reported temperature in Maine to that of a chart of Hanover, New Hampshire. One person did complain that he based his prediction on four months, but I didn't see anyone specifically complain that he put up what he said was the temperature for winter months in one place, to a chart of annual average temperatures in another place. And no-one observed the distinct rise in temperature in Hanover, New Hampshire either. Blind and dumb, the lot of them.


...The North Atlantic (60-0W, 30-65N) has been cooling for the last decade. The rate of cooling is just as fast as the rate of rise of the late 20th century. At that rate we will be back to Little Ice Age conditons lickety-split.

Lickety-split? Here's a chart showing David's "cooling" area in the context of last year, the hottest year on record:

lsvalgaard set the ball rolling with this droll comment:


May 4, 2015 at 3:33 pm
Leif, I know you don’t respect David’s opinions, but are you saying there is misinformation in this piece?


May 4, 2015 at 6:37 pm
You should read some of his earlier posts. It is all about New Hampshire. He throws in the North Atlantic as an afterthought, but it is not his main argument.
My comment does not further elaboration.

MarkW objects to Leif injecting a dose of reality into his utter nutter paradise:


May 4, 2015 at 4:14 pm
I have the same reaction every time I see you attack someone for daring to disagree with you.

Most of the comments are from Anthony Watts' conspiracy theorists, who think that all the scientists in the world have been faking global warming, and melting ice sheets, and acidifying oceans and droughts and heat waves and floods. And the media is also in on the hoax, as are farmers and polar bears ... in fact everyone is in on the hoax except for Anthony's conspiracy theorists who have sussed out the fake warming from the comfort of their WUWT-engaged keyboard.  Scott, for example, after Nick Stokes has pointed WUWT-ers to all the raw data, asks:


May 4, 2015 at 6:25 pm
Can anyone comment if NOAA’s deception has a chance of being exposed by the GWPF study that will come out sometime in the (hopefully) near future?

Does anyone seriously take WUWT seriously? Apart from the weird and wacky, that is.