Death from cold and heat - it's different

At WUWT today (archived here), Anthony Watts has discovered a new paper in the Lancet from a tip from a denier. The paper is a massive analysis of mortality in many different countries, but states it cannot be considered a global study (it doesn't include Africa or the Middle East for example). The authors analysed mortality in different weather - hot and cold.


The study was based on the largest dataset ever collected to assess temperature–health associations, and included more than 74 million deaths from 13 countries

Greg Laden has already written an excellent article about it, so I won't repeat the points he made. What I will do is put up a couple of charts that will make you think. These are from Figure 1 of the paper. What they show is the different response to cold and hot weather. This first one is about Sydney: 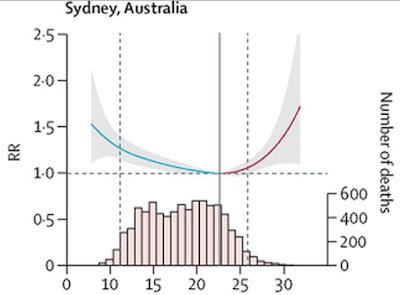 The x axis is temperature in degree Celsius. You'll notice the scale on the bottom doesn't even go to 35C. It is the mean temperature though (day and night). The number of deaths starts going up sharply after only about 27C, which is lower than the sort of heat waves we've been getting the past few years - even taking a mean. As stated in the paper:


Risk increases slowly and linearly for cold temperatures below the minimum mortality temperature, although some locations (eg, London and Madrid) showed a higher increase for extreme cold than did the others. By contrast, risk generally escalated quickly and non-linearly at high temperatures.


Cold temperatures have always been with us. It's the high temperatures that many people will not be so used to.  Here is another chart from Figure 1, this time from Rome: 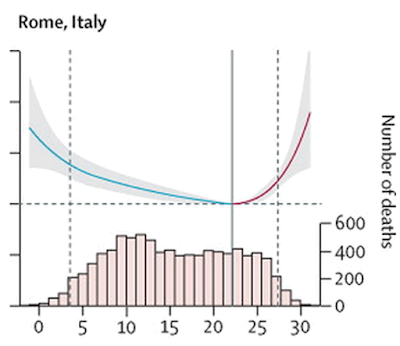 Again, notice how the number of deaths from cold go down gradually but spike much more sharply when it gets hot.

This next one is from London, where there is a sharp increase at both ends of the temperature scale, with the hot end being sharper than the cold: 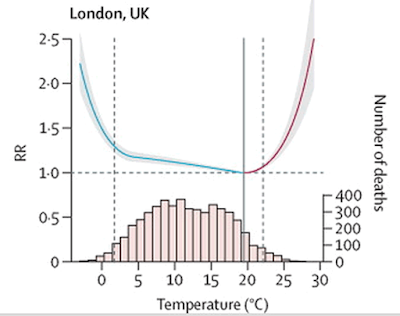 It shouldn't come as a surprise that since 1985 around the world in the places the researchers studied, there would be many more deaths during cold weather than hot weather. That doesn't mean, as Anthony Watts will have you think, that we can be complacent about the prospect of temperatures hitting 40C plus for days on end, with nights not getting much cooler.

You've probably all come across a paper by Steven Sherwood and Matthew Huber, about how we (and other mammals) have a physiological limit to heat. It might not be too long before places become uninhabitable for at least some of the year. I've quoted from that paper in the past, but it's worth a reminder:


Peak heat stress, quantified by the wetbulb temperature TW, is surprisingly similar across diverse climates today. TW never exceeds 31 °C. Any exceedence of 35 °C for extended periods should induce hyperthermia in humans and other mammals, as dissipation of metabolic heat becomes impossible. While this never happens now, it would begin to occur with global-mean warming of about 7 °C, calling the habitability of some regions into question. With 11–12 °C warming, such regions would spread to encompass the majority of the human population as currently distributed. Eventual warmings of 12 °C are possible from fossil fuel burning. One implication is that recent estimates of the costs of unmitigated climate change are too low unless the range of possible warming can somehow be narrowed. Heat stress also may help explain trends in the mammalian fossil record.


Don't leave it there. For a good perspective on the paper from the point of view of global warming, go and read Greg Laden's article.

Anthony Watts finally found a paper that isn't a "claim"!


Anthony Watts decided that he's found a respected journal. He wrote the following:


An inconvenient truth from medical research: cold is far worse than global warming at killing people

From the respected medical journal The Lancet comes this (h/t to Dr. Indur Goklany)

What? No "claim" in the headline this time around? Has Anthony finally discovered a scientific paper that he doesn't dispute? Wonder of wonders.


davidmhoffer couldn't be bothered reading the open access paper and asked the question:

Finally he did go back to the paper and discovered that the optimum temperature is different for different locations - surprise surprise (not). It's the temperature at which there is minimal mortality.

Mark from the Midwest comes up with a suggestion for everyone who has to work in a heat wave - sit still for a few days with a bottle of water and a sunshade:


May 21, 2015 at 11:55 am
“temperature of minimum mortality?” that’s easy, it’s the internal body temperature of 98.6F
Neither hot nor cold kills if your prepared. I live in an area with a pretty hostile winter climate, and the number of people that die due to anything but their own stupidity is, approximately, zero. The problem with cold weather is that it takes more resources to survive, and if you’re caught without them you are doomed as doomed can be. With heat all you need is a bottle of water, a bit of shade, and the sense to sit down and quit.
Survival means nothing more than looking at the extreme events in the area where you live, and preparing for them. Plus or minus a few degrees on a global scale seems pretty meaningless.


There are only ten "thoughts" so far. If we wait for a bit it probably won't be long before someone comes up with the idea that everyone in Africa can buy an air-conditioner for the heat. There's already someone talking about "fuel poverty" and I expect a lot more comments like that will surface as well. So far no-one at WUWT has twigged that the body responds differently to cold than it does to heat, or that heat kills a lot more quickly.

The risk of hot and cold weather - from Greg Laden

Heat kills! Pat'n Chip argue for survival of the wealthiest at WUWT - from HotWhopper