Oh, he of little brain...pumping floodwaters


Update: Anthony finally decided he'd made a blunder and has shuffled over to another blunder! (Mon Feb 17, 2014, Australian time)

Really?  Really and truly? The only pump? Was turned off? (Anthony Watts' article is archived here.)


Here is a picture of the just part of the flooding in Somerset.  Could one lone pump have stopped all this? 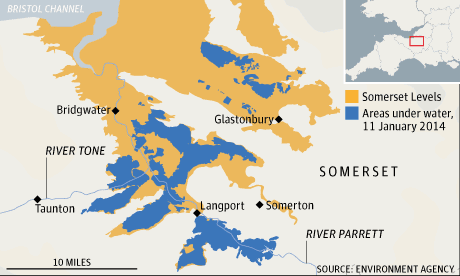 I'll risk making this article overly long, because this is relevant to the UK more generally.  From the BBC:


Groundwater levels are so high in some parts of the country that flooding is likely to persist for weeks or even months, experts say.

Scientists at the British Geological Survey (BGS) say levels are likely to keep rising even if there is no more rain, as so much water is soaking through the soil. 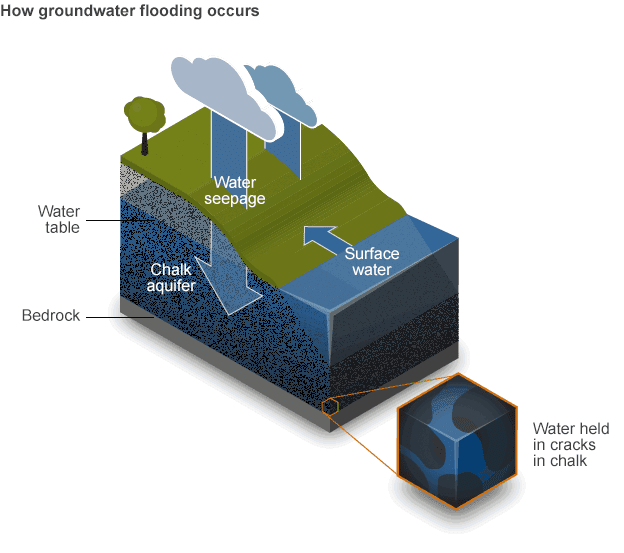 Pumping away: 62 pumps 24 hours a day plus 13 mega-pumps from the Netherlands = 8.8 million tonnes of water a day

Back to Somerset. Thing is, if you're pumping flood waters you've got to have somewhere to pump it.  When there's water, water everywhere you've got to take a lot of care.

It can be done, though. This is from the BBC:


From the Environment Agency on 27 January:


On the Somerset Levels Environment Agency teams continue to operate up to 62 pumps, 24-hours a day, to drain an estimated 1.5 million tonnes of water (equivalent to 600 Olympic-sized swimming pools) off an area of the Levels spanning 65 square kilometres – the biggest pumping operation ever undertaken in the county.


From the Western Gazette on 12 February:


The Environment Agency has been working with other agencies on some short term, emergency options to maximise the amount of floodwater that can be pumped away from the Somerset Levels and Moors.

This includes pumping to the Taunton and Bridgwater Canal and increasing the volume of floodwater that goes down the Sowy in the River Parrett Alleviation Channel.

Pumping at Beer Wall and Dunball to increase the floodwater going into the Sowy is due to start this week.

A statement from Avon and Somerset Police said all “risks and benefits” across the Somerset Levels and Moors have been considered in making this decision.


Two pumps from the Netherlands are being used to try to reduce water levels at the flooded Somerset Levels.

The area began flooding more than six weeks ago and the continuing heavy rain has since flooded dozens of homes.

In all 13 Dutch pumps were brought in by the Environment Agency and will be used to divert water to try and cut levels on the River Tone. ...When they all are up and running they will move 7.3 million tonnes of water each day from the Somerset Levels


Where did the water come from?

From the sky.  Here is a chart from the BBC:


From the UK Met blog:


As the unsettled UK weather continues this week, the Met Office’s National Climate Information Centre have looked at statistics for this winter so far (from 1 December to 10 February).

These add to previous facts and figures we put out earlier this week, and show a picture of continuing exceptional rainfall across many areas.

Looking at regions around the UK, these provisional figures suggest the region of SE and Central S England has already exceeded its record winter rainfall in the series back to 1910. It is currently at 439.2mm*, less than 2mm above the previous record set in 1915 with 437.1mm of rain.

For the UK as a whole, and also for Wales, both are fairly close to their respective record wettest winter levels in the national series dating back to 1910. Average rainfall for the rest of the month would likely see those records broken.

All countries across the UK have already exceeded their typical average rainfall for the whole winter (according to the 1981-2010 long-term averages). Normally at this stage of the season, you’d expect to have seen only around 80% of that whole season average.

All areas are also on target for a significantly wetter than average winter, with typically around 130-160% of normal rainfall if we get average rainfall for the rest of February.

All countries and areas are also on target for a warmer than average winter.

The Met Office blog listed the current wettest winters with this winter to date:


Another Daily Fail: Mat Collins does NOT disagree with Julia Slingo


Oh, and in case you read somewhere that Mat Collins disagreed with Dame Julia Slingo, Chief Scientist at the UK Met Office, who said:


Climate change is likely to be a factor in the extreme weather that has hit much of the UK in recent months, the Met Office's chief scientist has said.

Dame Julia Slingo said the variable UK climate meant there was "no definitive answer" to what caused the storms.

"But all the evidence suggests there is a link to climate change," she added.

"There is no evidence to counter the basic premise that a warmer world will lead to more intense daily and hourly rain events.".


@Rick__L I said that the models don't tell us much about how the jet stream is affected by climate change. I don't disagree with Julia
— Mat Collins (@mat_collins) February 16, 2014