I haven't posted any of the nonsense from HotCopper in a while.  So, courtesy of denmor, a science denier from HotCopper's science and medicine S&M club and the New Zealand Climate Science Coalition this is what passes for 'science' among the share trading science illiterati from Australia.  Denmor (who's been featured here before) and Clifford (Cliff) Ollier present a Gish gallop but not so much that we can't cover most issues touched on.

It makes for a long-ish post so if you arrived via HotWhopper's home page, click 'read more' below or click here.  (If you just want to see a pretty neat animation of CO2, jump down here.)

Professor Cliff Ollier of the School of Earth and Environmental Studies, the University of Western Australia, recently presented a paper in Poznan, Poland, in which he described the sun as the major control of climate, but not through greenhouse gases."There is a very good correlation of sunspots and climate. Solar cycles provide a basis for prediction. Solar Cycle 24 has started and we can expect serious cooling..."

First up, while Cliff Ollier is affiliated with UWA he's an "honorary research fellow" indicating he's retired, not a current salaried member of staff.  He's not a climate scientist.

Now that's cleared up, let's look at temperature and solar activity from SkepticalScience.com: 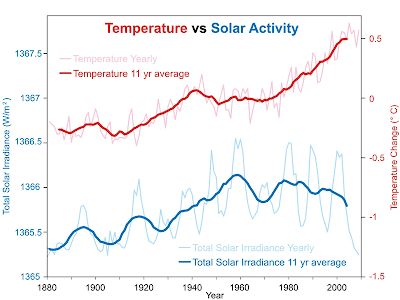 Denmor and Cliff Ollier are wrong. Temperature and solar activity were only going in the same direction until about 1940.  Something has happened.  A bigger forcing took over.  I'd go with the science and say it was the rapid increase in greenhouse gases, mainly because of all the carbon dioxide we're putting into the air.

Ollier continues with his disinformation, this time about sea ice:

Satellite data show global temperature is essentially unchanged in 30 years. Sea ice shows no change in 30 years, though every annual retreat is heralded by alarmists as proof of AGW.

Here is the Arctic sea ice volume from the Polar Science Centre.  The Arctic has been losing 3000 cubic km a decade since 1980.  This past decade the loss has been even more dramatic. 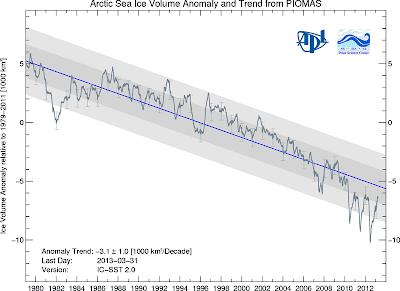 As for summer ice loss, this is what has happened:

The summer ice has declined so much that now there is even a small amount of commercial shipping through the Arctic, which brings its own risks.

And around Antarctica? Yes, sea ice has grown over winter (it mostly disappears in summer).  Here is some recent research on the subject from Nature, offering different perspectives.

Cold meltwater stops the ice from melting from below

Scientists have known for several years that meltwater from ice sheets can form a cold, fresh layer on the ocean surface that protects sea ice from the warmer waters below....In the model, the meltwater formed a cool freshwater cap that facilitated the expansion of sea ice, leading the researchers to identify this as the most likely cause of the recent trend.

Holland and his colleague Ron Kwok, a climate researcher at NASA's Jet Propulsion Laboratory in Pasadena, California, showed that in certain regions of Antarctica, such as the Weddell Sea, sea-ice changes are almost entirely due to the physical force of the winds. In other areas, such as the King Håkon Sea, they result from the combined effects of wind force and temperature.

This snippet from a chart (from the Polar Research Group at the University of Illinois at Urbana-Champaign -  Cryosphere Today) shows that globally sea ice is declining even below the 1979 to 2008 mean (the flat line).  Click here for the full chart:

Land ice in some parts of Antarctica is melting rapidly

In West Antarctica and on the Antarctic Peninsula, ice is melting rapidly.  In regard to the latter in particular, it has definitely been linked to global warming and is contributing to rising sea levels.

The ocean is getting hotter

Just how many lies can one man tell?  And they are so easy to disprove.  The oceans are heating up and denmor and Ollier can't pretend otherwise.


Ocean temperatures are more important than land temperatures because the ocean holds much more heat than the atmosphere. Since 2004 the Argo observation system of 3000 buoys has been measuring the sea temperature. The machines go down as far as two kilometres and surface every ten days to send out their data, which shows a cooling trend. Because we have data to great depths we know there is nowhere for the heat to be hiding. The greenhouse warming hypothesis requires a rise in temperature. The observed cooling trend show it is not happening, so the hypothesis should be rejected.

This chart from NOAA shows just how much the oceans are heating up. Click here for more charts from NOAA: 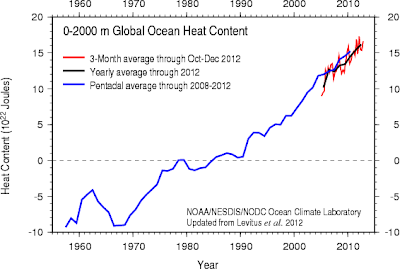 Why deniers deny science...it's because of taxation!

Now we get to the crux of the matter.  It is quite likely the reason for the lies:

Carbon dioxide requires extra treatment, as it is the alleged cause of global warming, and the fundamental reason for a carbon tax and calls to cut the carbon footprint.

Denmor adds later in the thread, in response to Jantimot who writes: In that case, it must be TAXED!


It is its called a carbon tax

Denmor and Jantimot and Ollier don't want to pay for pollution.  They would rather destroy the world than pay a penny more in taxation.  In Australia, people get compensated for the carbon price so even that's no reason to deny science!


When CO2 was twenty times greater, there were no humans or any other life on land

As for relying on this:

The CO2 content of the atmosphere has been much greater in the geological past, without catastrophe.

Humans weren't around when the CO2 content was 'much greater'.  They weren't even a twinkle in the eye of the cosmos.  500,000,000 years ago, back when CO2 was about twenty times greater, there wasn't even any life on land.  From Ohio State University:


For a decade, he and his team have been assembling evidence of climate change that occurred 500 million years ago, during the late Cambrian period. They measured the amounts of different chemicals in rock cores taken from around the world, to piece together a complex chain of events from the period.

Their latest measurements, taken in cores from the central United States and the Australian outback, revealed new evidence of a geologic event called the Steptoean Positive Carbon Isotope Excursion (SPICE).

Amounts of carbon and sulfur in the rocks suggest that the event dramatically cooled Earth's climate over two million years -- a very short time by geologic standards. Before the event, the Earth was a hothouse, with up to 20 times more carbon dioxide in the atmosphere compared to the present day. Afterward, the planet had cooled and the carbon dioxide had been replaced with oxygen. The climate and atmospheric composition would have been similar to today.

Dr Salzman observes that after the SPICE event, when CO2 dropped and oxygen rose:


“If we could go back in time and walk around in the late Cambrian, this seems to be the first time we would have felt at home,” Saltzman said. “Of course, there was no life on land at the time, so it wouldn't have been all that comfortable.”

This is how Ollier dismisses a 40% increase in CO2:


The amount of CO2 in the atmosphere is a mere 0.04%, and it is indeed increasing, but the increase started long before 1945 when AGW is supposed to start.

Here's an animation of CO2 rising as featured on the NOAA website. You can be mesmerised by recent growth, or skip towards the end to see how it's changed over 800,000 years - well before modern humans arrived:

I'd wager that neither Ollier nor denmor has ever read a report from the IPCC.  Ollier writes:


The UN's main adviser, the IPCC, uses adjusted data for the input, their models and codes remain secret, and they do not accept responsibility for their projections.


For people with a strong stomach and a head vice handy

As denmor graciously says, there is more of Ollier's nonsense here if you can stomach it.

This is denmor's signature slogan would you believe:


Scepticism is the highest of duties; blind faith the unpardonable sin." Huxley

"Never argue with stupid people, they will drag you down to their level and then beat you with experience."


Denmor shows not an ounce of scepticism when it comes to serial disinformers.  As for the "stupid people" quote, well I wouldn't bother arguing with denmor, I'll let science demonstrate where he is wrong!