Will we tip or turn? Michael Mann vs thick-as-a-brick Eric Worrall at WUWT 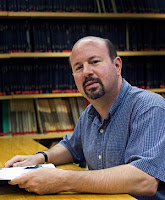 Eric Worrall is one of Anthony Watts' frequent guest writers for his climate conspiracy blog wattsupwiththat (WUWT). Eric's practically taken over WUWT this past few months, with Anthony Watts all but disappearing from the scene.

Now Eric isn't all that smart when it comes to climate, which is why his only outlets are right wing nutter and conspiracy websites. He hasn't had an article published in Time, that I'm aware of.

Eric's article had the headline: "Michael Mann Adjusts the Climate “Turning Point” Out to 2020" - which was wrong, wrong, wrong. Michael Mann didn't adjust anything, as you'll soon see.


Until recently Mann claimed 2016/17 was a climate tipping point.

First of all, Michael Mann didn't shift any of the myriad climate tipping points (there are lots more than one, but Eric probably doesn't know that). And Eric provided not a scrap of evidence that Dr Mann had ever claimed that 2016/17 was a climate tipping point, (although it quite possibly is for one aspect of climate or another).


Neither did Eric bother to read the report to which he referred about the 2020 date. It wasn't about a tipping point it was about a turning point. A turning point for us. A point at which it is hoped that we will turn away from our current path of destruction.

The report is called 2020 The Climate Turning Point. There are a number of authors and contributors, but Professor Mann isn't listed among them. The preface to the report is by Stefan Rahmstorf and Anders Levermann, from Potsdam Institute for Climate Impact Research. If you don't have time to read the rest right away, at least read the preface.

Where Eric got his association with Michael Mann was an article in Time, with the headline: "The Single Shining Hope to Stop Climate Change", which Eric either didn't read or didn't understand. Here's an excerpt (my emphasis):


If emissions continue to rise beyond 2020, the world stands very little chance of limiting global warming below 1.5 degrees Celsius, the threshold set by the Paris Agreement, and a temperature limit that many of the world’s most vulnerable communities consider a threshold for survival. We have four years to bend the curve of global greenhouse gas emissions toward a steady decline.

The good news is, we’re already moving in the right direction. Global carbon emissions have plateaued, and are projected to remain flat over the coming years, thanks to China’s widespread economic transformation and the global boom in renewable energy production. The 2020 climate turning point is within reach.

The turning point refers to us turning away from our headlong rush into danger. It refers to bending the emissions curve toward a steady decline. Here is an extract from the introduction to the report, referring to the six revolutions needed to ensure we deliver the 2020 turning point:


Just as the Paris Agreement was a deeply shared endeavor, so delivering on its promise must be too Our success in Paris was not an accident; it was the result of us rallying behind a common strategy, and abandoning resignation for a can-do attitude that accepted this challenge as our own. In this next phase, we will need to come together once again. Delivering these 6 revolutions will not be easy, and we will need to support each other along the way to ensure the transition is just and equitable. But just as we delivered success in Paris, so we can deliver the 2020 climate turning point too. This is our moment. This is our great opportunity.

The six revolutions described in the report are (my emphasis):

We're starting to get there, with emissions reported as being flat for the third year in a row. The next target is to get emissions declining - and to achieve the six revolutions listed above. With Eric Worrall being so silly that he doesn't know if he's tipping or turning, we can't count on him to help us.

This is just another example of how climate disinformers are vile, execrable creatures, who prefer to libel decent men and women rather than help make the world a better place.

They are also quite stupid.

We've a long way to go yet

By the way, just because emissions are flat doesn't mean atmospheric CO2 has stopped rising. It will keep rising as long as we emit more than can be absorbed. We've a long way to go yet before atmospheric CO2 flattens out. Some people think it's too late to stay below 2C. It's likely we won't be able to stay below 1.5C. There is a lot of adaptation ahead of us from rising seas, heat waves, floods, unlivable land, food production and more. It's going to be tough for us and our children, and theirs - and for all life on Earth.


Mostly I'll let you imagine them. Anthony's blog is now mainly the domain of mindless idiots. For example, despite temperatures rising, extreme events getting worse and more frequent, ice melting, seas rising - all just as predicted by climate science, markl had this thought:

April 9, 2017 at 8:47 pm
Not one/nada/zilch prediction made by the alarmists has been realized. The man in the street knows it. Why doesn’t the media know it? Stupidity or by design? One has to wonder.


One has to wonder at the years of science denial by Anthony Watts and his fans, despite the decades and mountains of evidence. Nuts is one word for it. (There are other words.)


2020 The Climate Turning Point - by  Chloe Revill and Victoria Harris, with lots of eminent contributors and sponsors