2016 was the hottest year on record for the troposphere

For the troposphere, 2016 was the hottest year on record! 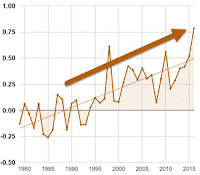 The troposphere temperatures for December 2016 have been released. The lower troposphere is recorded in UAH v6 beta 5 and RSS TLT v3.3. This report also covers RSS TTT for the troposphere (without the "lower") and follows pretty much the same format as previous monthly updates.

For RSS TTT (troposphere), 2016 was the hottest year in the record. Last month was the second hottest December on record.

The lower troposphere (UAH beta v6.05) also showed 2016 as the hottest year in the record. However, December was only the sixth hottest December on record, with 2015 the hottest.


First here is RSS TTT with the latest dataset, version 4. TTT seems to measure more of the troposphere than TLT (that is, it has a greater vertical profile) with less of the stratosphere than the mid-troposphere data (TMT). It shows a higher rate of warming than RSS v3.3 and higher than UAH. Hover the cursor (arrow) over the plots to see the data points, trend etc.

This combination reduces the influence of the lower stratosphere, which is cooling at most locations. TLT gives most weight to the temperatures closer to the surface. TTT gives more weight to the troposhere and less to the stratosphere than TMT does, but not as much to the lowest levels of the troposphere as TLT does. However TTT has version 4, while TLT is still only provided as version 3.3. For a fuller explanation see the RSS website or the July 16 report here.

Figure 2 | Troposphere temperature for the month of December only (TTT). Anomaly is from the 1979-1998 mean. Data source: RSS


The rest of the charts are from UAH beta v6.5. This is almost identical to the old version of RSS, which is v3.3, so is likely to be updated at some time. (Other RSS data sets, like TTT are now at version 4.)

Figure 3 | Lower troposphere temperature for 12 months to December. Anomaly is from the 1981-2010 mean. Data source: UAH


Figure 4 | Lower troposphere temperature for the month of December only. Anomaly is from the 1981-2010 mean. Data source: UAH


Below is a chart comparing the strongest El Niño years since 1979, which were followed by a La Niña, just for UAH v6 beta 5. I've included the 2015/16 period for comparison.


La Nina didn't end up happening. The odd thing is that even though it didn't emerge in 2016, the UAH December temperature has dropped back to the level of the December 1998, when there was a La Nina. I still think the UAH data record as a whole would be quite different if satellite drift were better accounted for by UAH - going by comparison with RSS data.

That's all for 2016 from the troposphere, at least as far as temperature articles go. From now on the monthly updates will be for 2017. I might even change the format, for a bit of variety:)


This news release from Remote Sensing Systems (RSS) just arrived by email. Worth clicking the link because there are a lot of charts:

Using the latest version (Version 4.0) of the “Temperature Total Troposphere” (TTT) dataset, RSS scientists showed that 2016 was 0.31 degrees F warmer than the previous record, set in 1998. The third warmest year occurred in 2010. In addition, 9 out of 12 months for 2016 were the warmest of that month ever recorded in the satellite record. By this we mean that January 2016 was the warmest January, etc., for all months except for May, June and December (the December record was set in 2015). The record warmth was caused by long-term global warming combined with the strong El Niño event that occurred in the winter and spring of 2015-2016. …

…For this work, we used the “Temperature Total Troposphere” (TTT) dataset instead of the more commonly cited “Temperature Lower Troposphere” (TLT) dataset. TTT measures the temperature of a thick atmospheric layer, extending from the surface to about 8 miles (about 13 km) high. We use TTT because TTT has been updated to version 4.0, while version 4.0 TLT is not yet available. (We use TTT instead of TMT because the latter has not been corrected for the influence of stratospheric cooling.) In the upgrade to version 4.0, we improved the method we use to correct for drifting satellite measurement time, leading to more reliable measurements, particularly since 1998. The new version shows more warming than the older version, particularly since 1998.

Here is one of the charts, showing how new records keep being set over time, particularly in 2016. A red dot means a hot record and a blue dot means a cold record. I've added small black arrows down the bottom so you can more clearly see which years are 1980, 1990, 2000 and 2010.

As you'd expect, there were more records of both types in the early years of the data set. There have not been any cold records set since 1993. In 1998 there were a ten record hot months, all but two of which were broken again in subsequent years. In 2016 there were nine record hot months.