Anthony Watts gets into a dither with global weather

From some comments here at HW I discovered that there was a strange exchange at WUWT the other day. I say it was strange, because Anthony said he disagreed with a person while at the same time saying he agreed with him  - on the exact same point. Although it was strange, it was not uncommon as far as Anthony Watts is concerned. He doesn't understand what he reads, and doesn't seem to understand what he writes. He also demonstrates one of the telltale signs of a denier (and conspiracy theorist) - simultaneously adopting two mutually exclusive positions.

It started with the headline to the article from David Whitehouse (archived here - see Hotwhopper's Desperate Deniers Part 6): "2015 Global Temp, Or How Some Scientists Deliberately Mistook Weather For Climate"

The headline was over a graphic of Bart Simpson writing "climate and weather are not the same", which David Whitehouse and Anthony Watts should take to heart: 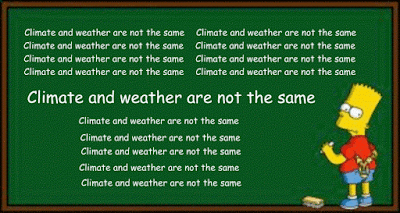 The headline prompted a comment from Harry Twinotter, that it would take a brave person to refer to conditions averaged over the globe for a year or more as "weather":


Harry Twinotter  January 23, 2016 at 2:05 pm
I can’t say I understand the headline for this article. It would take a brave person to call conditions averaged over the globe for a year or more “weather”.

This was picked up by Brandon Gates, who observed that maybe it is more weather than climate, relating it to deniers who try to argue that a winter blizzard means anthropogenic global warming isn't real:


Brandon Gates  January 23, 2016 at 5:49 pm
Harry Twinotter, "It would take a brave person to call conditions averaged over the globe for a year or more “weather”.

Especially compared to, “bbbbut blizzards!”. Compared to the standard, albeit somewhat arbitrary, definition of climate as the 30 year statistics of weather, I’d say it’s more weather than climate.

I would not feel comfortable calling something “global weather”, but I take your point.


Anthony Watts saw two science-lovers taking up valuable space on his climate conspiracy blog with some sciency debate, and wrote:


Anthony Watts  January 24, 2016 at 7:06 am
Weather is local and regional in scope; microscale, mesoscale, or synoptic scale. There’s no such thing as “global weather”, but since both you and Harry are big on disinformation, I can see why you’d embrace something so wrong.


Perhaps it's me that's a bit dim because I don't see the sense in Anthony's retort. It raises a number of questions, including:

There's no evidence that "Some Scientists Deliberately Mistook Weather For Climate"


How about David Whitehouse's headline. Is it true that "Some Scientists Deliberately Mistook Weather For Climate"? If they did, David provides no evidence. He doesn't cite a single example. Not one.

Therefore I agree with Harry Twinotter (and Anthony Watts, if he was agreeing with Harry) that David Whitehouse's headline was cockeyed. David was confusing two weather phenomena, the "blob" and El Nino, with climate change as evidenced by the long term increase in global mean surface temperature (among other things).

His error is similar to that which Hollin and Pearce made in their paper in Nature Climate Change. David Whitehouse seemed to be under the illusion that one year's temperature rise alone was sufficient for scientists to agree that climate change is happening. Or at best, he seemed to be alleging that scientists were attributing the entire rise in surface temperature in 2015 to anthropogenic global warming. He's wrong. Some of it was attributed to El Nino. However it's the long term trend, which 2015 added to, that is evidence of climate change.

Let me illustrate first with an animation of two short periods of time from recent years:

Both the above charts span a period of four years. If you took either of them in isolation from the long term, you would be wrong to argue that they meant the world is cooling or warming. They just mean that over the short time span illustrated the global mean surface temperature was hotter or colder at the end of the four years than it was at the beginning of that four year period.

Now look at the long term, which unequivocally demonstrates that the world is heating up:

The ups and downs along the way do nothing but demonstrate that for short periods, the annual global mean surface temperature can jump up or down from one year to the next. This can be because of internal variability, such as an El Nino event, which can shift heat from the ocean to the sea surface to the atmosphere and to the land surface. Or it could be the impact of volcanic forcing, which can cool the planet for a couple of years. However over the longer term the world is clearly getting hotter.

It's the long term trend that scientists are referring to when they talk about global warming.


Look at the evidence


Here are some quotes from media articles to illustrate this:


Global temperatures in 2015 were by far the hottest in modern times, according to new data from American science agencies.

By placing the 2015 temperature in the context of "modern times", it's clear that this ABC article is consistent with Figure 2, not Figure 1.


Climate change has surpassed "symbolic thresholds," the organization warns in a report released Wednesday from Geneva, with global surface temperatures set to breach a 1 degree Celsius rise from pre-industrial levels. The previous warmest year was 2014 and the past five years are shaping up to be the hottest such period.

Again, this article from National Geographic places the 2015 record (and the past five years) in the context of the rise in temperature from pre-industrial levels. It is consistent with Figure 2, not Figure 1.

From the press release from NASA about the hottest year on record:


The 2015 temperatures continue a long-term warming trend, according to analyses by scientists at NASA’s Goddard Institute for Space Studies (GISS) in New York (GISTEMP). NOAA scientists concur with the finding that 2015 was the warmest year on record based on separate, independent analyses of the data.

Once again, the article places the 2015 record in the context of the long-term warming trend.

You might ask how was global temperature reported in 2008, when it dropped to a four year low? This is from the NOAA Global Analysis for 2008:

Once again, the temperature for 2008 was placed in the context of the long term record, consistent with Figure 2, not Figure 1.


Can one speak of "global weather"?


I'm not so sure than it's always wrong to speak of "global weather", though I won't be surprised if some experts will correct me. There are lots of websites that report world weather. There's a website that compares weather on Earth with that on other planets. Anthony himself has quoted a tweet from Roger Pielke Jr, saying: "How long does our global good weather luck last?". (Which makes one wonder how Roger missed the all the massive floods, droughts, fires and storms).

A few hours ago, Anthony posted a video that he called "amazing". It was from NASA's Global Modeling and Assimilation Office. In one of the files on the GMAO website, was the statement:


Our Goddard Earth Observing System (GEOS) model is used for global weather and climate applications, in assimilation as well as simulation

The Bureau of Meteorology doesn't have the word "weather" in its climate glossary. NOAA does, and describes it as:


So I'll let you argue among yourselves as to whether or when it's ever okay to speak of global weather :)

Whether global weather is okay or not, the point remains. David Whitehouse was wrong. The scientists who spoke about 2015 and global warming did not confuse weather and climate.


From the HotWhopper Archives