More wild weather for the USA

A couple of days ago I mentioned the big storm that was threatening the east of the USA. At the time, most weather forecasters were giving a cautious warning, saying it was a bit soon to know for sure when and whether it would hit. However Bob Henson wrote at wunderground.com: "computer models were in remarkable agreement late Tuesday". Today he wrote:


Everything from tornadoes to paralyzing ice to blizzard conditions will be unfolding over the next several days as a massive storm system, dubbed Winter Storm Jonas by the Weather Channel, takes shape over the eastern half of the United States. Computer models have doggedly pointed to this scenario for the better part of a week, and the model consensus on the big picture continues to be unusually strong. The crosshairs for the heaviest urban snow appear to be on the Washington, D.C., area; more than two feet are possible there and nearby. Blizzard warnings were in effect Thursday afternoon in and near the Washington, D.C., area. The crystal ball is cloudier on where the storm’s north edge will end up--and that location is crucial, since it could be near New York City.

Turns out that the models were right and the storm is already making its mark. From what I hear, people have been skidding off the roads and clearing out the supermarket shelves. The weather is going to be nasty, with:

I don't know how Anthony Watts missed this storm. He's not said a word about it. Not a whisper. Not a murmur. He's too busy accusing scientists of faking data and hyperventilating because he thought he'd found an inconsistency at NOAA. He was wrong, so his article is full of cross-outs. (I don't know why he didn't just delete it). When there was some rain and snow in California recently he could wait to spread the news, even though he was way, way out in his prediction of snow.

This storm would be helped by the very hot seas. Here is a chart showing the sea surface temperature anomalies, from NOAA. Look at all that red and yellow. Global warming is really making its mark! 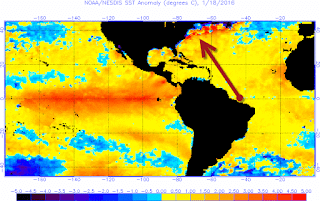 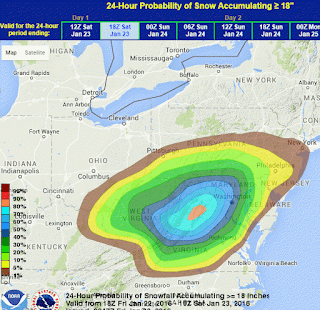 The USA has certainly been getting more than its share of horrible weather lately.