Today is the day when COP21 is hoping to finalise the climate change agreement. The meeting was extended by a day, with many people remaining hopeful that a meaningful agreement will be reached. The UN Secretary-General Ban Ki-moon put out a press release saying that while there were still some important issues to be resolved, there has been considerable progress.

The latest draft can be downloaded here. As at the time of writing, it's Draft 2. (You can compare it with Draft 1 to see the progress in negotiations. Where the brackets have been removed it signifies agreement was reached on that point.)
UPDATE: I've just seen that the final text has been agreed. I'll let you know as soon as it's available - or you can keep an eye on the UN website. There's a press conference scheduled for 11:30 am CET today - Saturday (Europe time).

Sou 2:23 pm AEDT 12 December 2015
This week there was real silliness from deniers and from people campaigning to stop climate change.

Regarding the latter, people from Avaaz put up "wanted" posters around Paris, with photos of seven people it termed "Climate Criminals - The Dirtiest Fossil Fuel Lobbyists behind the doors of #COP21". This reminded me of the Heartland Institute's posters of terrorists and mass murderers. For one thing, I doubt most people would regard some of the seven as the worst offenders. They even included a photo of Fiona Wild, listing her on the poster as "PR Manager for BHP", which she is not. It wasn't till you got to the Avaaz document itself that they list her position as Environmental Affairs Manager at BHP Billiton, which I don't think is correct either (I believe she is Vice President Environment and Climate Change - there are others who are employed in this field at BHP, too.) Dr Wild gave a speech last year at the EarthWatch annual dinner, where she spoke about the Bush Blitz program and her involvement in Earthwatch over the years. She also talked about how BHP is working to reduce carbon emissions, and said:


And now climate change is a major focus of my role at BHP Billiton. We recognise that sustainable growth requires an effective response to climate change. We accept the Intergovernmental Panel on Climate Change’s assessment that the warming of the climate is unequivocal, the human influence is clear and the physical impacts are unavoidable. We recognise our responsibility to take action by reducing our emissions, increasing our preparedness for the physical impacts of climate change and working with others, including industry and government, to enhance the global response.

Those are not the words of a "fossil fuel lobbyist". I'm not arguing that BHP is a model corporate citizen. What I am saying is that the Avaaz campaign missed the mark completely by singling out an environmental scientist to put on its wanted posters, and particularly one who has personally been involved in environmental activities for many years. If they think that BHP is to be held to account, they would have been better to put its Chair or CEO on its posters, not someone who is working from within to get BHP to do better. Their campaign organisers strike me as uninformed, immature, and vindictive. Just as I've criticised Anthony Watts and deniers in general when they form lynch mobs, I abhor the lynch mob mentality of Avaaz.

Some of the other faces I wouldn't regard as among the seven top climate criminals either.  Avaaz conducted a Kangaroo Court of the sort I commented on the other day and seriously missed the mark. This sort of thing is going to happen more often as time goes by. It won't matter how much progress the world makes in mitigating climate change, there will be people protesting it's not enough.  The protesters of the next generation will undoubtedly be correct that the generation before them didn't do enough (no matter what is achieved), and some of them will probably target the wrong people, just like Avaaz did in Paris. 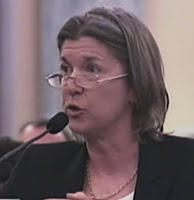 Climate mitigation activists weren't the only ones who went over the top. Deniers got over-excited this past week too. Much has been written already about Ted Cruz' denier circus, wasting taxpayer's funds on putting performing monkeys on display (Judith Curry, John Christy, Mark Steyn and Will Happer). It really was a circus. Judith Curry became apoplectic at one point, that she was recognised as a science denier. Mark Steyn was jumping up and down about "impugning integrity" which, coming from him was the height of hypocrisy. While Judith Curry spluttered and protested ""Did you read my written testimony?", seconds before she questioned the greenhouse effect, saying: "The issue, the issue is what is causing the warming. Is it natural variability or is it humans?" Then Mark Steyn interrupted shouting something about SUVs. I don't know if a panel before a Senate Committee has ever behaved so appallingly or if this is normal behaviour from witnesses in the halls of government in the USA.

An article at AAAS had the headline "From a bully pulpit, Ted Cruz offers his take on climate change", which closely reflected the impression I had. I'd never seen Ted Cruz perform before. Watching his opening remarks it struck me that he could make a very good living as one of the US television preachers who con the life savings from gullible people looking for a saviour.

Then there was Marc Morano, who misrepresented an interview he gave to John Cook as a "debate". It wasn't. It was an interview. Mark didn't impress a lot of the deniers at WUWT, who after finally managing to get Anthony Watts to belatedly post an audible file, made comments like:


Enjoyed the interview, but not at all a “debate”, was it? Cook was just asking questions.


I have to say, Marc Morano comes across as somewhat manic and his constant interrupting makes him look bad against a calm and moderate sounding Cook. What a shame as his points are valid and Cook needs to be pinned down.

That interview got some people looking for a soundbite response to the fact that 97% of science shows that humans are causing global warming. Here were some suggestions:


One possible (and quick) refutation of the 97% claim.
– 97+% of priests believe in God
– 97+% of astrologers believe in astrology

Yeah - put that against 97% of climate scientists know that humans are causing global warming.


PS I've been otherwise occupied this week, and Anthony Watts has missed me.  Don't panic, Anthony - I'll be back on deck soon.
Posted by Sou at 1:44 PM