Anthony Watts falls in love with Alexa rankings - and bounces


For a fake sceptic who is constantly disputing numbers that have been provided by observers, checked by analysts, verified by scientists and fit with the theories - Anthony Watts is remarkably accepting of numbers that he likes, even though few if any experts in that field pay them any mind.

I'm talking about Anthony's love affair with Alexa. No, it's not a woman it's a webstats service now owned by Amazon.com.


More than 40% of WUWT visitors don't bother to read a full WUWT article!


Today Anthony has put up another chart, this time boasting of his bounce rate (archived here).  The bounce rate is the proportion of readers who visit a site without clicking through to another webpage on the same site.

Let me point out that to read an entire article on WUWT requires at least one extra click.  So if WUWT had a bounce rate of 40.90%, that means that 40.90% of his visitors don't even read one whole article.

On the other hand, a site like this one shows the most recent seven articles that you can read in full without clicking through once.  So if there was a bounce rate of 18.60% that would mean that even though readers could read seven articles in full and still be counted as a "bounce", 81.40% of visitors want more than just those seven articles.  That's assuming Alexa was close to being accurate.

[Correction: This assumes that everyone first arrives at WUWT and HotWhopper by landing on the home page, which ain't necessarily so as Collin points out below - he is such a spoil sport :D. Some people will arrive via a Google link to a specific article and some will get directly to an article by a link from Twitter or elsewhere.]

BTW - for some weird reason, Alexa.com has always shown HotWhopper with an unbelievably low bounce rate.  On Google Analytics the bounce rate is quite respectable - varying each month between 55% and the low 60%s. That number can't be compared with the Alexa bounce rate but I figure it's pretty good. Particularly when more than 3/4 of visits are from people who've visited before so they are probably just catching up with recent articles and don't need to click through.  Here's a discussion of bounce rates.


As an aside, when the Scottish Sceptic put up a web ranking, Anthony's second comment and his only request AFAIK, was to ask him to include yours truly or, as Anthony put it the lunatic fringe blog known as “hotwhopper".

In this latest article on WUWT, HotWhopper is noticeable for its absence.  Now why would that be, I wonder?  Surely Anthony isn't just limiting his list to websites with a higher bounce rate than WUWT! Talk about cherry-picking!

Given that Anthony seems to have left a few sites off his little list, lets add some back. Wunderground.com, with it's brilliant blogs has an Alexa rank of 606 - Anthony's blog isn't in the same league so I can understand why he left that off the list.  It's got a decent bounce rate too.  A bit better than WUWT at 39.4%.

Thinkprogress.org, which hosts climateprogress has an Alexa rank of 4184, a lot better than WUWT so I can understand why Anthony left that off the list, too, even though it's bounce rate is higher than that shown for WUWT.


Anthony has to work hard to "compete" against real climate science websites, like realclimate.org, which despite only posting a few articles a month has maintained a strong web presence for many, many years.  Anthony has to put up at least three silly articles a day to attract his visitors.  Quantity wins over quality every time with the illiterati.  I notice that in the comments, someone unkindly drew attention to the fact that most WUWT readers, according to Alexa.com, don't rate highly education-wise.

Skepticalscience.com also continues to impress and doesn't have to put up three or more shoddy articles a day to attract a lot of visitors.  It has a respectable Alexa.com ranking FWIW and, though it has a higher bounce rate according to Alexa.com, it's articles are based on science (unlike WUWT) with hyperlinks to lots more information.

How to improve your Alexa ranking

When Anthony Watts urged all his followers to install the Alexa toolbar last May, his rank suddenly improved a whole lot - going from a global rank of 30,000 to around 20,000 almost overnight and another 10,000 in a matter of weeks.  You can see this clearly in his Alexa web stats (archived here for posterity) 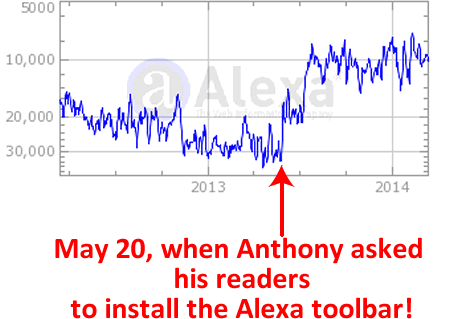 It's not as if Anthony needs to do this sort of thing to fake a jump in his readership.  His blog is very popular and gets lots of hits every day.  As he later found, his blog is right up there in popularity among wordpress blogs.  It's not just the 8% dismissives who go there, even normal people visit WUWT to see what the wacky deniers and climate conspiracy theorists and other utter nutters are up to.

Update: Last year, Victor Venema did an analysis showing that the uptick in WUWT's readership in May last year wasn't real.  It only showed up in Alexa, not any other webstat measure, and can therefore be attributed to Anthony's toolbar request.


From the master webmasters: Alexa is unreliable


Alexa isn't reliable for web stats.  What it does is measure the traffic of people who have the Alexa toolbar installed.  This is what Paul Stamatiou, designer at Twitter, wrote about Alexa rankings back in 2007, showing the big difference in Alexa rankings between two sites that had similar numbers of visitors.


This is what people on the "#1 internet marketing forum since 1997", Warrior Forum, say about Alexa - and more here.  And this from one of the WarriorForum gurus. Anthony - eat your heart out. Warrior Forum has a global rank of 215 on Alexa :) (Lower is better.)


This is from another SEO blogger (SEO=search engine optimisation):


Besides the obvious issue that your rankings will be based only on those who actively participate with Alexa, there is also the issue that your competitors (or you) can easily purchase hits for Alexa for just a few dollars. I saw an ad on Fiverr offering to let people buy hits in packages of about 10,000 or so for Alexa to build rankings.


EricHammer could very well have had the WUWT herd in mind when he wrote that article. He goes on to write that Alexa ranking is "helpful" because of the "herd mentality issue":


No – I wouldn’t say Alexa is useless. It’s just not a very accurate measure of your site’s popularity amongst the Internet elite of the world. It is helpful to put up a high Alexa ranking because of the herd mentality issue – people like to visit sites they think are popular. So when you have a high Alexa ranking, they think your site is worth something.


Yes, that's right. If you want to boost your Alexa rankings, you can always pay for it. (I've got better things to spend my hard-earned money on.)

Climate blogger, Collin Maessen, wrote about this last year, with a follow up post using yours truly as an example just a few weeks ago.  (Collin works in IT I think, so he knows about such things.)


How to improve your Alexa ranking


After Collin's article and my mysterious drop in Alexa rankings even though Google Analytics showed HotWhopper was getting more readers by the week, I did a little experiment - I soon varied it from the experiment I wrote about here.  I installed the Alexa toolbar on a browser that I don't normally use and made sure I visited HotWhopper every day and opened a few pages.

This is what happened:

Alexa.com dropped my ranking while Google showed no particular change.  The Alexa ranking then dropped hugely  for no reason around the end of January, while Google Analytics was showing a big jump in visitors from December.

It was at this point that I installed the Alexa toolbar and opened a few HotWhopper pages every day.  You can see the results above.  The Alexa ranking for HotWhopper immediately stopped falling and started to improve again, quite markedly.

Now it might not be just my tiny number of clicks each day that caused the ranking to go back to what it was in October last year, but it's a mighty big coincidence.  The other thing is that visits to HW are quite a bit higher than they were back in October last year - so who knows what Alexa ranking HW will end up with, though it does look to be tapering off :)


I don't know if Anthony Watts is looking to sell his website or get more advertising revenue or if he is just looking for pats on the back.  Whatever, he's deluding himself if he's relying on Alexa rankings to compare his website with other climate websites.  It would be interesting if he used another comparison, like comparing how climate scientists rate his website alongside that of, say, realclimate.org or skepticalscience.com.  I have a feeling it would look something like this.