Oh no! Not "it's the sun" again. Recycling regimes at WUWT...


Some of us have noticed that Anthony Watts often recycles stuff.  This time it's with a difference.  He's recycling but shifting goal posts at the same time.

"It's the sun" is the subject of his latest recycle (archived here, update here).  I wouldn't have known it was a recycle except that Anthony himself let us know.  I googled and I came up with lots of references to another professor sadly gone emeritus.  A chap by the name of Sam Outcalt, who used to be an academic.  A Professor of Geography. (Geography professors risk getting a bad name for themselves.  You'll recall that other Professor of Geography - who didn't earn emeritus status but is retired - Tim Ball.)

Anyway, Sam has decided "it's the sun" and Anthony Watts agrees.  Anthony refers us back to an article he wrote way back in 2008, when he also said "it's the sun".  Today he wrote about this supposed "major regime transition":


The major regime transition is at the maximum of the integral at 2005.71, which corresponds to October 2005, the same date I identified.

Clearly the sun entered into a magnetic funk then, and has yet to come out of it. We live in interesting times.


It's worth doing a timeline.


If you have ever studied how the magnetic dynamo of the sun is so incredibly full of entropy, yet has cycles


Some say it is no coincidence that 2008 has seen a drop in global temperature as indicated by several respected temperature indexes compared to 2007, and that our sun is also quiet and still not kick starting its internal magentic dynamo.


Ooh! The temperature dropped in 2008 and it's the sun so we're heading for a Dalton Minimum!  How did that work out?


Jump ahead to 2012.  Anthony put up an article by Sam Outcalt (archived here) where he talked about "serial regime transitions" and decided that


The dramatic “hockey stick” trace, which began in 1976 accompanied by a major transition in the Pacific Decadal Oscillation, ends at the onset of the 21st Century and might be better termed the modern warming regime. This regime was replaced by a pronounced cooling regime.

He pronounced, after drawing some curves and digging some holes that: the modern warming regime ended in 1997.  Well, there were two subsequent years that were cooler than 1997, namely 1999 and 2000.  But for the rest?  Where has Sam's cooling regime gone?

If you go to that article, you'll find that Sam looked into three boreholes on along Trail Ridge Road in Rocky Mountain Park, Colorado and decided that


the actual drop in surface temperature over the first decade of the 21st Century is probably more than double the conservative estimate in the realm of 4-6 C. 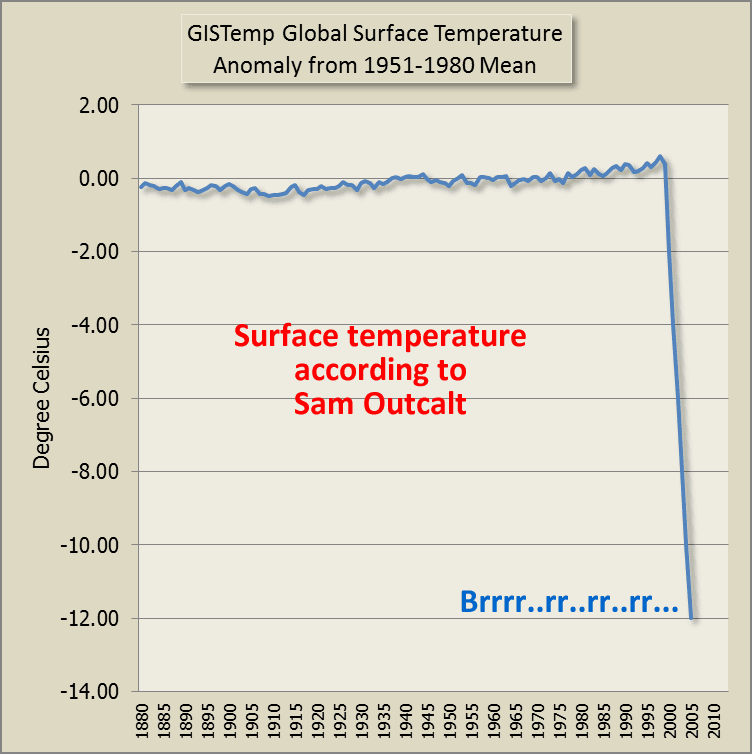 
Fast forward to February 2014.  To today.  Sam has another shot (archived here, update here).  This time he does some more number crunching and reckons that  "The convex inflection in 1998 appears to mark the end of the Modern Warm Regime."

According to Sam and Anthony, not only did the Modern Warming Regime stop in 1997 1998, but there has been an "onset of cooling" that onsetted in 2004.  Or, as Anthony wrote, in October 2005.  Why the onset of cooling didn't onset itself at the end of the Modern Warming Regime in 1997 1998, Sam doesn't say.  And why they keep shifting the dates of these regime shifts, heaven only knows.


Summing up the shifting regimes


So to sum up the current state of affairs.

The Modern Warming Regime stopped in 1997 1998.  The onset of cooling onsetted in 2004 or October 2005.  So how many years have been cooler than 2004?  Well, the fact of the matter is only one year has been cooler than 2004 according to GISTemp and that was 2008.  So that brings us full circle to Anthony's 2008 article where he reckons that we were heading for a Dalton minimum.  But then Anthony Watts claims a "major regime shift" in October 2005.  HW readers know that 2005 tied with 2010 as the hottest year on record so far.

It didn't go too well then and it's not doing any better now.  Let's have a look at all this on a chart of global surface temperatures - I've animated the chart starting in 2008.  Here you go:

Back in 2012, Tamino wrote an article about Emeritus Sam Outcalt, with his usual flair.  As did Ben at Wotts Up with That.

Scientists have already looked at what would happen if the sun decided to go very quiet and I've written about that a few times already, such as here - with links to the science.


Not too many are buying this regime shift idea.  Anthony Watts tries to back-peddle and contradicts himself in response to a comment. (Archived here)

Bloke down the pub says:


Nylo says something but if you can understand what it is, you deserve a medal:


February 12, 2014 at 3:57 am
Sorry but I don’t think this study has merit. Whether the integral goes up or down depends on where you put the average that you substract from the data, so it is an important value. But we cannot be sure that the average of the last 60 years in particular has any physical significance. We don’t know if it represents the real average status of these solar variables. Other 60 year periods would offer different average values to substract, based on which the integrals would have looked different.


Guy says that capitalism proves that climate science is a hoax or something like that, I think:


February 12, 2014 at 4:35 am
“This is such a simple and obvious point that I really do not understand why the IPCC and the modellers did not see it.” Steven

If it is not caused by man and curable through considerable wealth transfers from the productive to the political class then it is not worthy of inclusion in IPCC reports. They might well have seen it and rejected it. I believe this is the case for historical measurements of CO2 levels other than ice cores, which show concentrations exceeding 400 PPM over a century ago.


Darrel Dorbin says that Steven Goddard (who he calls a "scientist") has shown that the USA (or the world? or maybe they are the same thing to Darrel) hasn't warmed since 1990.  Tell that to the Alaskans! (excerpt):


February 12, 2014 at 5:07 am
Steven Goddard is one of the scientists who was sidelined in the climate scammers’ takeover by non scientists, of scientific reporting on climate.

The raw data is placed unaltered online by law.

I consider this kind of paper to be voodoo cyclomania, so count me out.


To which Anthony Watts replies that he "thinks not" but in the same comment talks about the "new regime".  And remember his comment in the article itself, where he claims joint ownership of the "major regime transition" in October 2005 or was it 2004!


REPLY: It’s not a paper, its an email posing a question. The question is; “can the TSI data be linked to global temperature”? Like you, I think not, but I’m always willing to ask the question again with new data and analysis.

I note you said pretty much the same thing about the Ap index too, yet here we are with it still bumping along the bottom in this new regime.- Anthony