Where are the clowns? 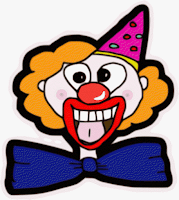 There is not a lot to report from denialists this week. Their repetitive denial is boring. Judith Curry is not very busy, merely posting things that caught her eye to give voice to her Trump fans (politics), her core anti-science brigade (science), and her luddites (energy and policy), interspersed with silly guest articles by deniers. She's given up on science altogether and is now a hard core climate science disinformer.

At WUWT, Anthony Watts has been posting articles saying the reason no debates had a climate question was because no-one in the USA is interested in climate change. Given that Anthony touts his blog as "the world's most viewed site on global warming and climate change", this raises the question of whether he is rethinking the point of his anti-science efforts of the past nine years or so.

In one article, Anthony wrote how people are more scared of clowns than they are of climate science (and terrorism) - which could be the reason he continues to act the clown. (Anthony is a bully who tries to scare people.)

Rather than shifting to "climate change is real but it isn't bad", WUWT-ers are still digging in and claiming climate science is a hoax. Anthony is promoting another stupid article by his favourite conspiracy theorist, Tim Ball. Tim was telling his readers that he doesn't believe the science that shows that CFCs were thinning the ozone layer. He also wrote how he doesn't believe in the greenhouse effect, which pleased Anthony's anti-science fans. Tim does believe that climate science is a hoax and there has been a 200 year conspiracy involving most of the world vs him. Anthony Watts keeps promoting these crazy ideas.

Speaking of crazy ideas, Anthony posted an article by Eric Worrall, who thinks that Australian Senator Malcolm Roberts "skewered" Professor Brian Cox. Really? He lauded him for "demanding" evidence - decades after it's been produced - that humans are causing climate change. Eric suspects that "this challenge is going to get very uncomfortable for Australia’s chief scientist" and will be "very interesting to watch". (Eric got blasted by Anthony's fans for suggesting that CO2 "should produce a mild warming effect".)

The only other article I'll comment on is the one where Anthony Watts wrote, long after everyone else knew, that Joe Romm of Think Progress is very keen to influence US policy direction on climate change. Thing is, that Anthony's headline didn't reflect his article. His headline was "Climate Progress, Joe Romm, outed as political operative by Wikileaks". Anthony's evidence was an email from Judd Legum, not Joe Romm. Most of his article was about how Roger Pielke Jr was sacked by Nate Silver after writing rubbish. Anthony blames Joe Romm, not any of the other people who wrote how his article was bad.

If this article is not quite up to par it's in part because deniers are losing their way and in part because I'm having trouble coming to terms with what could be signs of the fall of western civilisation. When 40% of the USA is voting for Donald Trump one has to be careful not to despair. A large number of lawmakers in the USA are standing on an anti-science platform. Education is failing. Extreme leftists and pseudo-greens are spreading lies about Hillary Clinton.

Yes, I know that it's human nature to want to believe in the supernatural. That doesn't explain why such a huge number of people in supposedly enlightened societies are unwilling or unable to differentiate between objective reality and wacky conspiracy theories. (I'm reading Shawn Otto's book "The War on Science: Who's Waging It, Why It Matters, What We Can Do About It". The book is brilliant, but very depressing. I've yet to get to the "what we can do about it" part.)