Lordy! Christopher Monckton's miracle - there never were and never will be any ice ages! 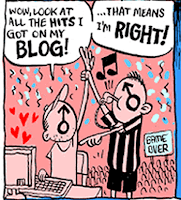 In case you missed it, Christopher Monckton has been writing a series of articles proving beyond a shadow of doubt that the earth has never slipped between glacial and interglacial conditions. He's now up to Part 3 (archived here) of who-knows-how-many-parts in the series.

One thing that stands out is that in his Part 3, Christopher ignored corrections people made to his multiple errors in his previous (Part 1 and Part 2) articles.

There were more than 300 comments on Christopher's Part 2, so he just must be right :)

He continues in his latest article, where he claims that the scientist's estimate of climate sensitivity is too high. He wrote:


The CMIP5 models’ value is 3.2 K, which is a 92.5% exaggeration compared with the value 1.661 K found here. As we shall see later in the series, even this corrected central estimate is substantially too high.

Given that the planet has already warmed by more than 1 K since industrialisation, and CO2 hasn't yet doubled let alone come to any sort of equilibrium, one can only marvel at the miracle that is to occur in coming decades.


Ice ages and hothouse Earth are but a myth ... Christopher has proved it


Now, the mere fact that process engineers often try to impose an upper bound on feedback where it might lead to instability does not prove that climate feedbacks in the region shown in Fig. 1 as unstable are impossible. However, it suggests that they are unlikely; and, in the next article, we shall demonstrate that, in the climate, feedbacks do not occur in that region, and that they only appear to do so owing to a substantial error in climate feedback analysis.

Christopher had two Figure 1's. I think he was referring to his second Figure 1 but I can't be sure of that (given there are two of them). We'll say it's the figure below. The region shown as "unstable" in his Figure 1 is what he calls a region of instability and higher. 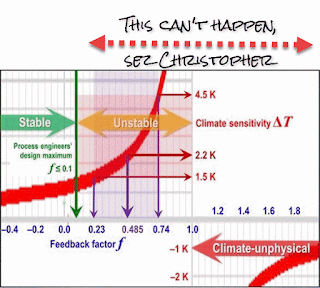 Given that the climate can never enter a period of instability, that means that what scientists thought were ice ages must have been mere figments of their collective imaginations. And when deniers say that the world was so much hotter umpteen zillion years ago, they were obviously not even wrong. I say that because Christopher Monckton has proved (beyond a shadow of doubt) that our planet cannot enter a period of instability, therefore it cannot shift from one type of climate regime to another.


Praise the Lord (Monckton) and hallelujah!


One person commenting credits Christopher with saving the world from climate change disaster.  lgp wrote how grateful he is to young Christopher for preventing ice ages and hothouse climates:


September 6, 2016 at 10:21 am
We have 4.5 billion years of observational evidence wherein the climate has NEVER driven into the unstable region. Monckton should take credit for that.

Nick Stokes echoed the praise for this miracle that Christopher has wrought and called for the world at large (or the dim corners of it at any rate) to give thanks:

I'll let you tell the world of this miracle granted by the good Lord, Christopher Monckton of Brenchley.