This is rich. A climate science denier on Twitter wrote a sarcastic tweet, and Anthony Watts is irate.

No he's not irate that the denier was sarcastic. What he's irate about is that Gavin Schmidt, the Director of GISS at NASA didn't call it out.

Anthony Watts wrote a whole article on his blog at WUWT complaining that Dr Gavin Schmidt didn't repudiate this person. Here's the tweet in question (click the link to see it in context):

No reasonable person reading that tweet would take it at face value. It dings all sorts of alarm bells. Then again, whoever accused a "climate hoax" conspiracy theorist like Anthony Watts of being "reasonable"?

Here is some of what Anthony Watts wrote:


Wow, this is really something. Three days after a declaration about “faking climate science” to be “more emphatic” Not a peep from NASA GISS head Gavin Schmidt.

That’s a troubling omission of condemnation, especially since both sides of the climate debate should be condemning this. Science is no place for “faking graphs”. Period.


I’ve said before (after the OIG report slammed them) that NASA GISS is wasteful and redundant, and should be closed. Now it appears they may be under mendacious leadership as well.

Apart from his dumb claim that there are "sides" of a "climate debate" (trying to assert climate "hoax" conspiracies are somehow legitimate), Anthony is now blowing out of all proportion the fact that the head of a climate agency didn't bother responding to a dumb tweet from a denier - one of Anthony's own kind.

There are any number of reasons why Gavin Schmidt may not have replied to the silly tweet from @o_glyndwr1404. Here are some of them, you can add other reasons in the comments. 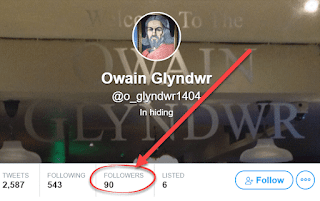 Here are some other tweets from climate conspiracy theorist, Owain Glyndwr @o_glyndwr1404 (re the name, see this Wikipedia article):

Perpetuating the myth that climate science is a warmist hoax, a scam:

Warmists get paid far more to hold their views. Global warming is a $1.5 trillion ANNUAL industry. All the people on that payroll have a vested interest in keeping dullards like you believing in the scam.
— Owain Glyndwr (@o_glyndwr1404) March 1, 2018

If space is the best way to do it, then I have some great news for you: nasa have been caught out faking data to support climate change which is clearly NOT happening. So that means we have nothing to worry about. They faked the data to keep that $2bn rolling in.
— Owain Glyndwr (@o_glyndwr1404) February 18, 2018


Making the ridiculous claim that climate change is fiction:


So Anthony Watts was up in arms that Gavin Schmidt didn't chastise a science denier for making a sarcastic tweet. That's a turn-up for the books!


The reaction to Anthony's explosion of indignation wasn't overwhelmingly supportive, although hardly anyone figured out that Owain Glyndwr @o_glyndwr1404 is a climate denier.

Keith was first to reply and stood up for Gavin Schmidt:


April 9, 2018 at 12:02 pm
Except that wasn’t a troll, was it? That was a like mind, impatient with us skeptics.
Schmidt doesn’t want to discourage THAT.
Just like Mosher isn’t over at all the alarmists sites, telling them to tone it down, or correcting their math.

John Bell wrote something about "faking graphs". I've no idea what he was talking about.

Curious George seemed to be the only one who figured the tweet was made in sarcasm, though it's not clear that George knows that the tweeter is a fake sceptic and conspiracy theorist:

It would appear that Ernest Bush didn't know that "Owain Glyndŵr" is a "climate hoax" conspiracy theorist:


owenkellogg should have realised that this was a clue that "Owain Glyndŵr" is playing games and is in fact a denier:


April 9, 2018 at 10:06 am
Not to mention getting the cliche wrong. “Means justify the ends” just confirms his ignorance.


Crispin in Waterloo but really in Potchefstroom is undoubtedly wrong. I'll bet that "Owain Glyndŵr" as a dyed in the wool, real live denier, is revelling in the fact he or she got a whole article at WUWT.


April 9, 2018 at 10:30 am
Oh my, oh my, oh my! They are going to regret that tweet.
Now we have the triple travesties of hidden declines, redefined peer review and faked temperature charts (as if Gavin proffering an annual global temperature record of 0.001 degrees with 38% confidence wasn’t fake enough).
The CO2 concentration is shooting up. The temperature isn’t. If your bread and butter is claiming they rise together, I guess the only destination left is the corner of Crap-Data Crescent and Libel Lane.


Finally, john eyon, is a wake up to "Owain Glyndŵr". A rare instance of a WUWT reader who actually checks things out (unlike the blog owner):


April 9, 2018 at 10:57 am
you might check Owain’s tweet history – he actually appears to be be a Right-wing anti-Alarmist troll (i was skimming his tweets and found it hard to pin him down) – if so – it’s kinda depressing that he wouldn’t hesitate to post a tweet in which he might have been trying to define the flaw in Gavin’s graphic