Give us your climate predictions, Andy May 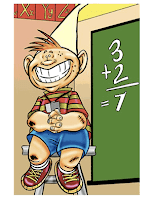 Every so often WUWT publishes what it describes as "failed climate predictions". It is often timed to distract from more bad climate news, such as the fact that last year there was a record increase in the annual rise in atmospheric CO2.

The list published today, from Andy May at WUWT, follows the normal pattern. It takes a bunch of statements that were published at various times, including several from 27 years ago, and claims they are failed predictions. This includes statements that refer to things that may happen by 2100.

Yep, science deniers tend to oscillate between living in the past and living way ahead in the future. Tim Ball, one of Anthony's pet conspiracy theorists, rarely manages to emerge beyond 1970. Andy May (and Anthony Watts) both implicitly claim they have a time machine that has taken them into the future.

There are two other points worth making before I give you some examples of the low regard they (rightly) hold for WUWT fans. (They know they are a the dullest of the dim-witted.)


Now Andy boldly states up the top of his list that:


To qualify for this list, the prediction must have failed. Alternatively, it is also considered a failure when so much of the allowed time has passed that a drastic and improbable change in the rate of change is required for it to be true.

His list doesn't pass his own test. Here is an example of Andy May's uncritical denial of science (which he credits to someone called Javier). This is the very first item in his list, so you can imagine what the rest of them are like.


1990 IPCC FAR: “Under the IPCC ‘Business as Usual’ emissions of greenhouse gases the average rate of increase of global mean temperature during the next century is estimated to be 0.3°C per decade (with an uncertainty range of 0.2°C – 0.5°C).” See here, page xi.

In other words, even back 27 years ago, and despite all the caveats the scientists put on their predictions at the time, the scientific estimates have turned out to be remarkably close to what has been observed so far.

Deniers at WUWT are unable to understand science, unwilling to try to learn about it, and resolved to deceive whoever is willing to be hoodwinked - that's as bad a combination as you can get in a human being.

I don't have the time, and I don't expect you have the patience, to bother with the rest of his not failed predictions. With a couple of exceptions where he singled out people who got a bit over-excited about declining Arctic sea ice, his list is an out and out failure. Either he's complaining that what was predicted by the end of the 21st century hasn't happened yet, or he's misrepresenting what has already happened.

My challenge to Andy May is to: