We've got to get serious about climate, we've wasted too much time

The IPCC Summary for Policymakers WG1 report has just been released. You can download it here.

I will be going through it and the technical report (when it comes out) over the next few days. You can download the full report here. Warning: it's 3949 pages long! An initial glance shows that we need to do more to reduce emissions. A whole lot more.

This report will have a lot more space devoted to regional changes. There is a fabulous interactive atlas which allows you to drill down and across in all sorts of ways.

There is so much to work through. Here are some initial points that might interest you:

The current pledges aren't enough for safety. We need to do more.

Andrew Dessler summed it up well, if a little crudely, on Twitter: 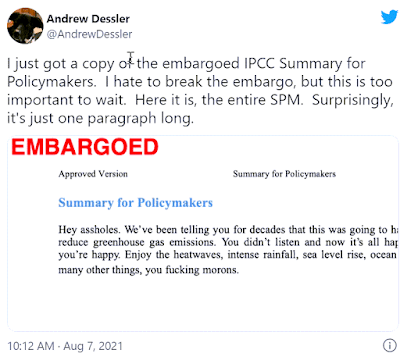 There are lots of articles in the media already. Journos got advanced copy (bloggers didn't). Also other sources.

It would be great if you would add more links in the comments.