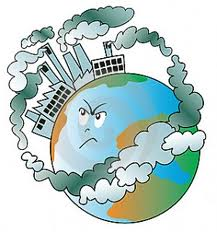 Anthony Watts loves a good conspiracy theory, particularly the one about climate science being a hoax. He would probably claim that he doesn't "believe in" conspiracy theories, yet he constantly posts them on his blog.

Today it was Paul Driessen, who's employed by CFACT to lobby against environmental protection, in one of his more blatant articles (archived here). Usually he is moaning about clean air and water, wishing the USA would resurrect the smog and dirty water of decades past. Paul wrote stuff like this today:

The quotes are a giveaway, even if you knew nothing about the subject. Putting the words "greenhouse gases" in quotes shows that Paul is a greenhouse effect denier. He doesn't believe in physics and chemistry.

He's also wrong - weather isn't predicted by looking only at atmospheric CO2. In fact, weather forecasts are made by models, initialised with current weather conditions. Similar to the models used by climate scientists who are studying long term changes in temperature, precipitation, ice cover, vegetation cover, ocean currents and all aspects of the earth system.

As you know, one of the telltale techniques of a climate science denier is the logical fallacy. Paul's article is riddled with them. Spot the logical fallacies, the irrational, the alarmism, and lies in these quotes:
Paul followed up that last one by pretending that climate scientists don't study all aspects of climate. He seemed to think that scientists don't study clouds, or oceans, or storms, or incoming solar radiation, or any of the other aspects that are in the scientific literature and have been covered in every IPCC report to date. (Most WUWT readers assiduously avoid reading scientific journals and the thought of opening any of the IPCC reports would make them ill.)


Given how deniers have been comparing all recent temperatures with those in the 1998 El Nino, this para is not only wrong, it's especially disingenuous:


The desire to secure research funding from Obama grantor agencies also perpetuated a tendency to use El Niño warming spikes, and cherry-pick the end of cooling cycles as the starting point for trend lines that allegedly “prove” fossil fuels are causing “unprecedented” temperature spikes and planetary calamity.

Paul has some hopes for the Trump administration. He wrote:


The Trump Administration and 115th Congress have a unique opportunity to change these dynamics, and ensure that future research generates useful information, improved understanding of Earth’s complex climate system, and forecasts that are increasingly accurate.

One of the things he wants to do is to cut back on climate research. Like many conspiracy generating climate disinformers, Paul Driessen is pushing the message that if we don't know about it then it can't possibly happen. He wrote that Trump should:


Significantly reduce funding for climate research, the IPCC and EPA, and science in general. Funding should be more broadly based, not monopolistic, especially when the monopoly is inevitably politicized.

The people who politicised climate science were the conservative extremists in the USA, who've now managed to take over the country.

After calling for climate science funding to be reduced, Paul then tried to claim that his anti-science rant  "is not an “attack on science.” It is a reaffirmation of what real science is supposed to be and do." Really? I guess if you're a WUWT authoritarian follower, you'll believe anything that fits your world view.

Of course Anthony Watts' fans lap it all up. They seem to prefer smog and non-potable water and droughts and floods and heat waves to a modernised energy sector.

Just days before NASA, NOAA and the UK Hadley Centre will be discussing what is likely to be the hottest year on record following a string of record hot years, Phillip Bratby's dumb thought was:


January 9, 2017 at 1:36 am
“man-made global warming” is dead, deceased, popped its clogs, passed on, expired, ceased to be, gone to meet its maker, joined the choir invisible. It is no more. RIP.

Toneb criticised the silly cartoon Anthony put at the top of the article:


January 9, 2017 at 2:20 am
Judging by the cartoon, the author still confuses weather with climate.
Well done.
I see nothing changes here.

M Courtney doesn't understand the impact that the incredibly high temperatures in the Arctic can have on the world, nor the concept of averaging, and is stuck in medieval conspiracies. He equates global temperatures over decades to centuries with global temperatures over weeks to months, and puts more faith in paleo studies of a proxy temperatures at a small number of locations relative to the global coverage of modern instrumentation. Even that he gets wrong:


January 9, 2017 at 3:04 am
You may be right. But the Arctic is not Global.
There is far more evidence that the MWP was a global event than that the current warming period is.
I predict that Antarctica won’t have a minimum ice extent next Summer.

Scottish Sceptic is another one who refuses to read any science. If he had he'd know that the ocean is studied because it has a huge impact on weather and climate:


January 9, 2017 at 4:44 am
The argument for their ability to predict long term climate goes thus: because the climate is isolated from space, it can only be the sum of what comes in and goes out.
Thus it follows that because the atmosphere is sealed, the weather can only be affected by the different between what goes in and out. And to a large extent that is actually true! It’s cold and night and warm during the day.
It therefore follows, that if they can’t predict short term weather, they can’t predict long term climate (as they are basically the same atmospheric physics).
“But hang on” – some might say – isn’t it obvious that the weather systems will affect the weather. “But hang on” say I – isn’t it obvious that the distribution nof heat in the ocean will cause long term “climate” effects. Apparently not! Or at least the alarmists still believe in the “sealed earth” concept whereby climate is not affected by anything other than atmospheric composition.