Anthony Watts and Steve McIntyre show once again that they aren't much chop when it comes to modeling trends or lining up charts.  People might recall how poor old Steve failed dismally when he made a faltering start to psych stats (with Lewandowsky et al) and gave up before getting to first base.  He failed again when he got stuck in core tops with Marcott et al.

Now they fail by pulling up a flawed chart from an early draft of AR5 and complain it's been corrected and revised (archives here for WUWT - updated here; and The Auditor's blog).  Actually, they don't acknowledge that it's been corrected.  Neither of them want to admit there is a flaw in the draft version, which everyone else saw at the outset.  If they had they wouldn't have had an article to write.

The problem was with this chart: 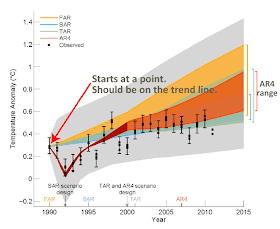 Tamino picked this up very early in the piece when someone called David Whitehouse tried to use it.  Ross McKitrick tried it on again recently.

I guess Steve McIntyre and Anthony Watts aren't very good at charts or models.  But if you look at this HadCRUT chart it's pretty easy to see what the problem is:

It looks as if the chart that was selected to replace the flawed chart is the one below.  It stretches over a longer time period, up to 2035 instead of 2015.  The notation says "the values are harmonised to start from the same value at 1990".  The key word, presumably, being "harmonised".  So it looks to me that it's Anthony Watts and Steve McIntyre who have it all wrong.

Funny thing is it's even pointed out in the thread at Steve McIntyre's blog (archived here), but instead of acknowledging that there was an error in the first version, the commenters get into a raging argument complaining that the "expert reviewers" weren't advised of the correction and revision.  The denialiti aren't doing too well in their attempts to prove all the models and all the IPCC report is "wrong" so I guess they'll have to be satisfied complaining they weren't asked permission to make a correction to the report!

The description of the above chart is long and dense (and has a typo).  It's described as follows:


Estimated changes in the observed globally and annually averaged surface temperature anomaly relative to 1961-1990 (in °C) since 1950 compared with the range of projections from the previous IPCC assessments. Values are harmonized to start form (sic) the same value at 1990. Observed global annual temperature anomaly, relative to 1961–1990, from three datasets is shown as squares (NASA (dark blue), NOAA (warm mustard), and the UK Hadley Centre (bright green) data sets. The coloured shading shows the projected range of global annual mean near surface temperature change from 1990 to 2035 for models used in FAR (Figure 6.11), SAR (Figure 19 in the TS of IPCC 1996), TAR (full range of TAR, Figure 9.13(b)). TAR results are based on the simple climate model analyses presented in this assessment and not on the individual full three-dimensional climate model simulations. For the AR4 results are presented as single model runs of the CMIP3 ensemble for the historical period from 1950-2000 (light grey lines) and for three scenarios (A2, A1B and B1) from 2001-2035. For the three SRES scenarios the bars show the CMIP3 ensemble mean and the likely range given by -40 % to +60% of the mean as assessed in Meehl et al. (2007). The publication years of the assessment reports are shown.


This one's interesting too.  It shows the CMIP5 model runs with observations:

Projections of annual mean global mean surface air temperature (GMST) for 1950–2035 (anomalies relative to 1961–1990) under different RCPs from CMIP5 models (light grey and coloured lines, one ensemble member per model), and observational estimates the same as the middle left panel. The grey shaded region shows the indicative likely range for annual mean GMST during the period 2016–2035 for all RCPs (see Figure TS.14 for more details). The grey bar shows this same indicative likely range for the year 2035.


October 1, 2013 at 8:47 am
The IPCC has throen the gppd name of science into disrepute. (sic)
Are they so stupid that they think that nobody would notice or are they so sure of themselves that they are certain that they will get away with this?


KR picks up on the incorrect alignment in the early draft and also picks up Steve McIntyre and says:


October 1, 2013 at 8:34 am
The draft Figure 1.4 appears to have been incorrectly baselined – set to the 1990 peak rather than the actual trend at that time.
However, the actual caption for the draft figure (as per the leaked document) states: “The 90% uncertainty estimate due to observational uncertainty and 16 internal variability based on the HadCRUT4 temperature data for 1951-1980 is depicted by the grey shading.” In other words, the grey area shows the range of variability around model projection means, which are shown by the colored bands. Observations fall well within the range of projections – something McIntyre somehow… failed to mention.

Alistair Ahs sort of spots the error in the draft version and says (excerpt):


WUWT playground monitor, richardscourtney isn't letting the IPCC get away with correcting a mistake in an early draft and says:


October 1, 2013 at 9:10 am
Alistair Ahs: ... I am curious to know if you really are called Alistair Ahs because I find it hard to believe anybody would put their own name to so stupid and pathetic an excuse as you have written. Anomalies can be normalised to any reference value. The correct reference value for a projection is from the empirically observed value at the time of the start of the projection.
Richard


Dave puts far too much faith in the incompetent Steve McIntyre and says:


The WUWT-ers' comments get worse and worse (updated archive here).  Most of the commenters are innumerate.

From The Auditor's comments


Wow, Judith Curry is living down to her reputation.  She's even made a "brilliant post" comment to The Auditor's silly article.  (Something we're used to on WUWT when the readers don't have a clue what an article is all about but feel the urge to write something!)